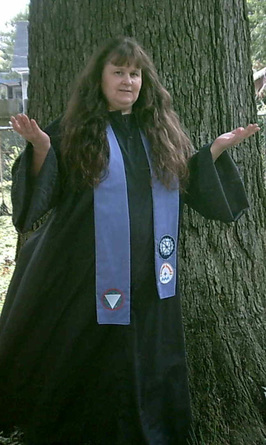 ​
​Rev. Reanna Marie is a Correllian High Priestess and member of the Witan Council as a "Notable Member" of the Tradition. Rev. Reanna served for many years as Head of Enchanted Realm / PURE Sanctuary Temple as well as being active in many other capacities.

Reanna Marie is her full legal name, not a craft name. The name Reanna refers to her mother Anna and carries the meaning of “Another Anna”.

Left: Rev. Reanna Marie, HP poses before the ancient Oak Tree from whose fallen branches many of her wands and magical objects d'art, have been made. 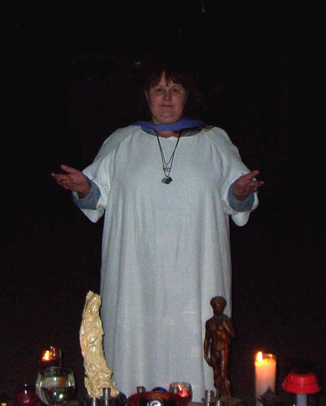 Rev. Reanna at the Altar of the Mother Temple after her initiation.
In addition Lady Reanna has worked as a product developer for Witch School International, creating such popular items as Reanna’s Garden Herbs.

Rev. Reanna has been with the Correllian Tradition since Year 2 Aquarius, having come to the Tradition through the Awakenings Bookstore, formerly located in Danville, IL. According to Lady Reanna “I stumbled upon the store, and I met Krystel.” 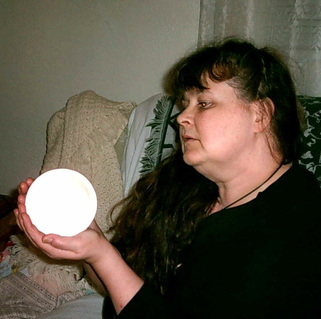 Above: Rev. Reanna Marie
On 3 November, Year 4 Aquarius, Rev. Reanna was acclaimed as Acting Head of Pure Sanctuary Temple. In this she succeeded Rev. Kim Reffet, who in turn had succeeded Rev. Becci Penry, who had founded the Temple in May of 1599 Pisces (1999 AD).

Pure Sanctuary began as a Study Group of Lady Krystel’s Dancers of Shakti Temple before becoming an independent group in its own right under Lady Becci.

Arch Priestess Virginia Bitterwind Smith, First Elder of the Correllian Tradition, extended her imperium to Rev. Reanna in order for her to take the role of Acting Temple Head, as she had earlier done for Rev. Kim. Lady Bitterwind has been a member of Pure Sanctuary since its inception and holds the role of Temple Advisor.

​Rev. Reanna changed the Temples name to Enchanted Realm and created a new sigil for it. 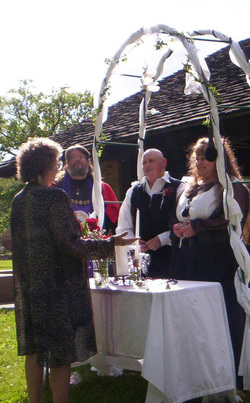 Above: Lady Bitterwind offers the Blessing of the Ancestors at the wedding of Reanna and Bert
​On 14 May, Year 5 Aquarius, Rev. Reanna married her long time love Bert. The ceremony was performed under the auspices of Enchanted Realm Temple with Rev. Don Lewis as chief officiant and Arch Priestess Bitterwind and Rev. Kim Reffet taking prominent parts. You can read about this event HERE

Since this was the year in which it was expected that the Witan would vote for a new First Priestess, it was considered especially important that this well-established Temple have a vote to cast. 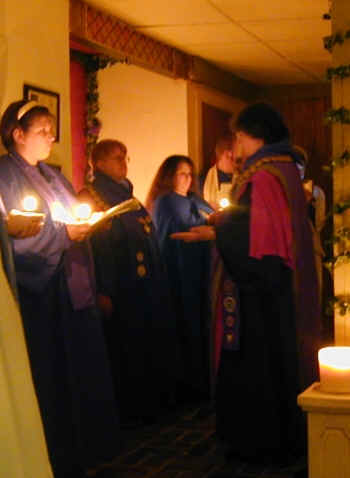 Above: Pure Sanctuary acted as Host Temple to the first public Lustration ceremonies. Here we see a Lustration in the Temple room of Pure Sanctuary. Lady Reanna can be seen at center frame standing next to Lady Becci (the red haired lady) as Arch Priestess Krystel invokes the Southern Guardian
As it happens of course this vote never came to pass –Lady Krystel ended up taking back the office of First Priestess and eventually simply retired from public life rather than from office. However the Temple’s vote turned out to be just as important during the events of the Blood Moon (October, Year 6) when several major Temples were expelled from the Tradition by the Witan Council.

By that time however Lady Reanna had attained her own Third Degree status, being initiated on 4 July of Year 6, becoming a fully seated member of the Witan in her own right –though the Joint Heads of course had only one vote on behalf the Temple.

For several years Enchanted Realm/Pure Sanctuary Temple enjoyed two campuses: Enchanted Realm in the Hoopeston area, and PURE Sanctuary in Danville, facilitated respectively by Rev. Reanna and Rev. Jason. After Rev. Reanna retired as Joint Head of Temple the Temple returned to having a single campus.

Rev. Reanna retired as Joint Head of Enchanted Realm / PURE Sanctuary in Year 9 Aq. Lady Reanna retains her seat on the Witan Council however as a "Notable Member" of the Tradition.
Rev. Reanna's lineage in the Correllian Tradition is thus: