This page is intended to help explain some of the symbols and robes used by the Correllian Tradition. The page is a work in progress, and will be updated with more information and photos on a periodic basis as time permits.

The page has three sections at present: The Stole: Symbols: and Robes.

The principle Correllian vestment is the Stole, a long piece of cloth worn around the neck during ritual.

The Stole worn by Outer Court Members of the Tradition is green.

The Stole worn by Clerical Dedicants, that is those who are studying to become Priesthood, is white.

The Stole worn by the Tradition's Clergy is purple.

The Stole worn by Priesthood whose Degree is Honorary is lavender.
Above is a picture of a Priestess wearing a Stole. The Priestess is Rev. Alyssa Maxon Kemp, HP. Rev. Alyssa is a High Priestess (subsequently acclaimed an Arch Priestess) and wears many Sigils on her Stole, denoting her many achievements and activities within the Tradition. Among other things Lady Alyssa is the Co-Head of Dancers of Shakti Temple, Head of Nine Suns Witan Shrine, and Head of the Order of Artificers. Lady Alyssa's stole is longer than most, owing to her many sigils. The Sigils show her initiatory Degrees (on the right side, viewers left side) and the organizations that she belongs to within the Tradition (on the left side, viewers right side). The meanings of many of the Sigils are given below. In addition each Temple has its own Sigil. 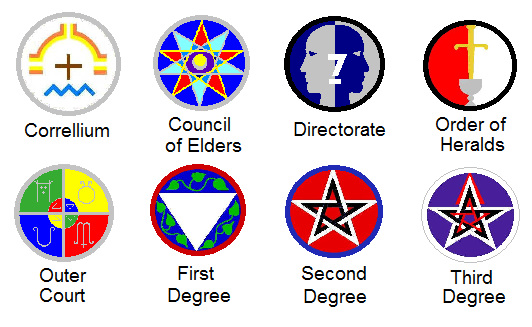 As mentioned above, sigils of the Degrees which one has earned go on the right, while sigils of organizations which one belongs to go on the left side of the stole.
3) ROBES

A sheer white tabard is worn by Cadet Priests and Maiden Priestesses, as well as by Witan Shrine Keepers.

This is one of the few tabards among the state robes to allow for a border, partly because of the fragility of the cloth. It is not uncommon to add a slender white or silver gray border at the edge of the sheer white tabard. 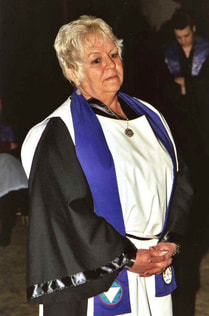 An Acting Temple Head is a Temple Head who is not yet fully seated in the Witan -which requires Third Degree status.

Witan Shrines are often started by persons who are not yet Third Degrees but are under the imperium of a Third Degree sponsor. After the Shrine becomes a Temple the Acting Temple Head cannot be fully seated in the Witan until after the Third Degree is earned.

From the inception of a Witan Shrine to full seating in the Witan can sometimes take several years. You can read more about this under STRUCTURE. 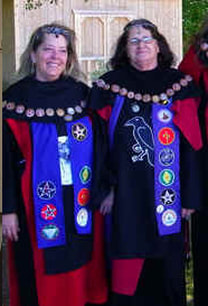 The Witan includes all fully seated Temple Heads, as well as the Elders and Officers of the Tradition.

Formerly the Personal Sigil worn on the Clavis was always the person's vision symbol, but today members of the Witan are allowed to design a symbol to represent themselves if they choose.

Although anyone can have a Personal Sigil, only members of the Witan display their Sigil on the Clavis. 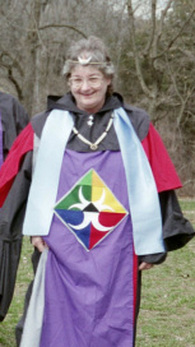 Elders of the Tradition wear a gray tabard, while Officers wear a purple clavis.

Elders continue to wear their personal vision symbol on a black clavis over their gray Elders' tabard. This is because, whatever their office they are serving in an individual capacity. An officer, such as the First Elder or First Director will wear a purple clavis, with the personal vision symbol. The First Priestess and First Priest however wear the Correllium on their clavis because the First Priesthood are considered to embody the  sanctity of the Tradition and serve as the primary oracular link to Deity and the Ancestors.

To the left you will see Arch Priestess Virginia 'Bitterwind' Smith, then First Elder of Tradition at Lustration in Year 3 Aquarius. Lady Bitterwind wears a purple clavis with her personal vision symbol.