At the turn of the new century the Correllian Lustration ceremonies were converted into twice-yearly formal ceremonies having the character of a Correllian Festival. This was at the suggesting of Correllian High Priestess Lady Green Owl of Trianna Temple, who felt that a public invocation of the Blessing and protection of the Holy Ancestors would be beneficial to the members of the rapidly expanding Tradition.

The Lustration is sometimes also referred to as the “Elustration” or the “Illustration” ceremony, particularly by members of the Bitterwind lineage.

Most Correllian ceremonies do not feature detailed "scripts". The Lustrations are a notable exception to this rule, because participants in the ceremony come from many differing geographic areas and often have had no opportunity to practice beforehand.

None-the-less the script is regarded as a guideline, and the actual ceremony often diverges from it. The script as presented represents an ideal ceremony. Not every step seen in the script is always used in every Lustration, as each ceremony has a strongly individual flavor.

Below is a list of the roles in the Lustration ceremony: 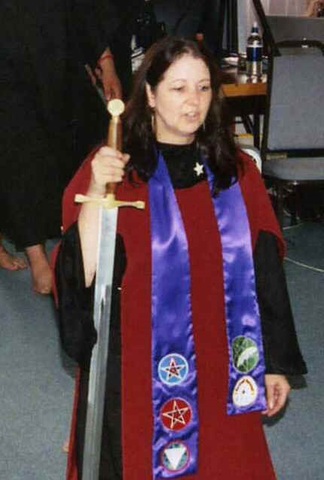 GUARDIAN -The Guardian offers the ritual challenge and opens each segment of the ritual with a discourse on the symbolism of the magical tool associated with that section of the rite.

SONIFER -The Sonifer announces each course of the ritual with a ringing of bells. The part was initially created especially for Rev. Reanna Marie, HP, of the Temple of the Enchanted Realm, and has since become a standard part of the ceremony. The term "Sonifer" comes from the Latin and means "One who brings sound (Son-)".

VOCIFER -The role of the Vocifer was created originally to be a kind of narrator, explaining certain aspects of the ritual which might not be obvious otherwise. This function was originally performed by the First Priesthood themselves, but became a separate part in order to allow more people to have speaking roles in the ceremony. The term "Vocifer" comes from the Latin and means "One who brings Voice (Vox)".

Left: Rev. Debbe Tompkins of Heritage Temple acts as Guardian during the Lustration of the Ancestors for Year 5 Aq.
AQUIFER -The Aquifer is the person in ritual who cleanses the sacred space with salt and water. The term comes from the Latin and means "One who brings water (Aqua)".

LUCIFER -The Lucifer is the person in ritual who charges the sacred space with fire and air. The term comes from the Latin and means "One who brings light (Lux)". Lucifer was the Roman name of the planet Venus as the Morning Star, and is a title of the God, and is used as such in the Vangello delle Streghe.

Above: Katell Desormeaux and Matt Haecker, as Aquifer and Lucifer, salute the Altar during the Lustration of the Ancestors for Year 12 Aq. at Sacred Sea Temple.

JUNEVOCATOR -The Junevocator is the Priest/ess who invokes the Higher Self (Juno) of the First Priestess at the opening of the ceremony. The term (Jun + Evocator) is loosely from the Latin and means "One who evokes the Juno".

GENEVOCTOR -The Genevocator is the Priest/ess who invokes the Higher Self (Genius) of the First Priest at the opening of the ceremony. The term (Gen + Evocator) is loosely from the Latin and means "One who evokes the Genius". 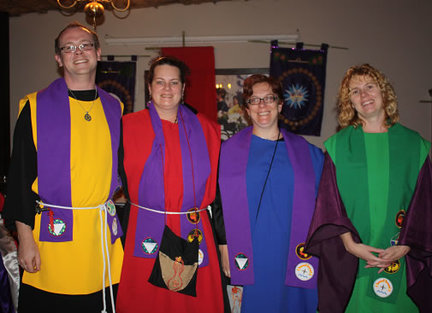 Above: Quarter Guardians from the Lustration of the Living for Year 13 Aq., at Clan of Kheper Temple in Capetown South Africa. L to R: Rev. Morne Pretorius, Rev. Debbie Geary, Rev. Julia Cameron, and Sharleen Olivier.
​EASTERN GUARDIAN -The Eastern Guardian represents the Airt of the East in the ceremony.

SOUTHERN GUARDIAN -The Southern Guardian represents the Airt of the South in the ceremony.

WESTERN GUARDIAN -The Western Guardian represents the Airt of the West in the ceremony.

NORTHERN GUARDIAN -The Northern Guardian represents the Airt of the North in the ceremony. to edit. 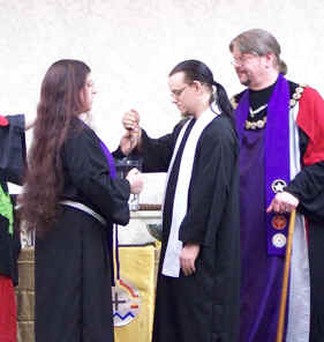 Rev. Elizabeth Hamilton and Tony Creager enact the Great Rite at the Lustration of the Ancestors for Year 9 Aq. in Salem, Massachusetts
​RITE LECTOR -The Rite Lector delivers the opening portion of the Charge of the Goddess, leading into the Joint Charge.

​RITE PRIEST -The Rite Priest delivers the Charge of the God during the Joint Charge.

CALIFERS-The Califers act to facilitate the Ritual Toast. The term "Califer" comes from the Latin and is the name for a Cupbearer, meaning "One who brings the Cup". The Califers were added as the number of attendees at the Lustrations grew, and it became necessary to find faster ways to pass out the ritual libation. Although the Califers in the script are specified as two, there can in fact be anywhere from one to four, or more, depending upon the size of the gathering. 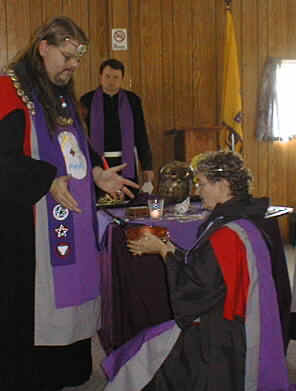 Above: Lady Bitterwind, then First Elder of the Correllian Tradition, kneels to receive the Blessing of the Ancestors through their Oracle, at the Lustration of the Living of Year 3 Aq.
​​ELDER’S HERALD -The Elders Herald acts to assist the First Elder in their role, in particular helping to carry the ritual implements used in the actual Lustration. In early public Lustrations the Elder's Herald was the actual full-time Herald to the First Elder. Later the role of "Elder's Herald" in the Lustration became a one-time pro-tem position appointed just for the ceremony. In a Regional Lustration this role acts as pro-tem Herald to the "Elder." 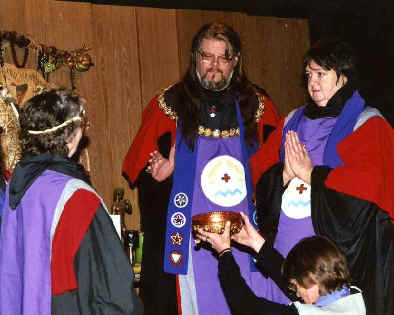