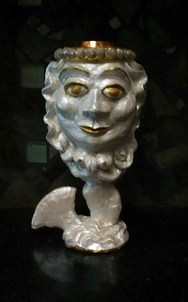 Above: Handcrafted Chalice created especially for the Hallowing ceremony.
For those that arrived early and the many already in Jacksonville, Thursday began with fellowship.  As with all Lustration many in attendance met their Correllian Family and dearest friends for the first time. That evening there was a pizza party and the decorating and setting up of The Temple and The Altar began.  Tables were set candles and other decoration placed, Banners were hung; patches were sewn on stoles, the Spring 2016 Silent Auction and Corr- Store tables were set up, the stringing of the Peace Prayer Flags that were created by many members of the Tradition, sound and DJ equipment hooked up   and the Ancestor Altar erected.

​Friday morning’s fellowship began with breakfast provided by Lady Angela Munn, her wonderful husband, Pat Munn and Compassion League Temple. The last finishing touches and decorating was completed. Video cameras and tripods were placed and workshop area set up. Festivities for the day began when the doors officially opened at Noon with many Merry Meets, Hugs and Kisses and tears of joy over reuniting flowed. Cameras were clicking away while most reminisced. 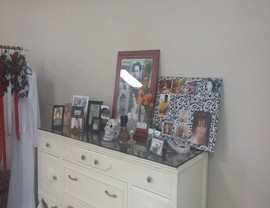 Above: The Ancestor Altar set up for the Lustration.
At 2:00 P.M. Lady Sherry Cooper presented a workshop on tinctures.  Participants learned the process of making a tincture, proper storage and the many uses they have from medicinal to magical properties. Attendees of the workshop made their own tinctures. Some of the herbs used were Lavender, Patchouli, Yarrow, and Sage. Herbs, vodka and jars were donated by Rev. Lori B.  See video from the tincture workshop HERE 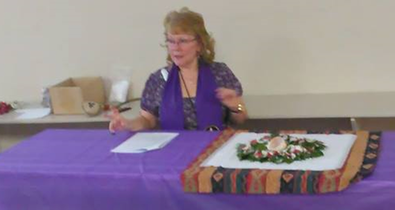 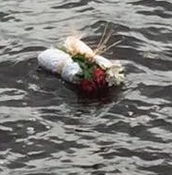 The Despacho ceremony participants then gathered by car and drove to The Saint Johns River. A procession line was formed as we gracefully walk down the very long dock of the Saint Johns River signing Native American Folk song “The River is Flowing”. The Despacho was then given to Lord Donald Lewis to place in the river as a gift to Pachamama (Mother Earth). See video of The Despacho workshop and Ceremony HERE

Left: The Despacho drifts out on the waters of the St. Johns River 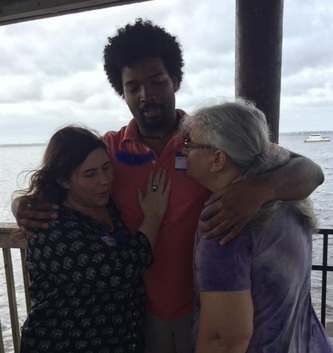 Left: Rev. Alyssa Maxon Kemp HP, Rev. Phoenix Williams HP, and Rev. Laurie Denman HP. At the St Johns River Rev. Phoenix brought through a spontaneous Oracle. The Oracle can be heard on the video of the Despacho Workshop

After heading back to the Temple from The Saint John’s River, we prepared for The Investiture Ceremony of the Hallowing of Arch Priestess Stephanie Leon-Neal.  This began with all in attendance settling in for The Silent Supper.  A delicious BBQ buffet was setup.  Before the instructions for the evening were given and the bell for silence was rung, Lady Stephanie presented her four White and four Red Ladies with a beautiful gift of gemstone necklaces; we each blindly picked what the universe gave us.  The Correllian Family enjoyed a wonderful meal in silence as We honored Our Ancestors.  Lady Stephanie was escorted from the Temple after the Ancestors Feast for her evening of solitude, silence and meditation in preparation for her Hallowing. 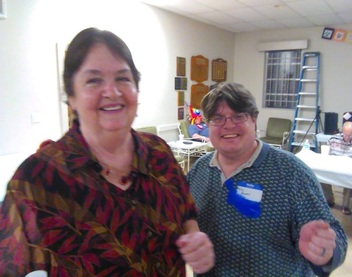 Once Lady Stephanie left the Temple the bell was again rung and activities resumed.  Lord Richard Keen was our official DJ for the weekend festivities. Correllians mingled. socialized, danced and played a great game provided by Lady Lily Green.  The overstuffed saran wrap ball was filled with all sorts of goodies from candles to chakra key rings, books and pendants and even a tarot deck.  Thank you Lady Lily for a fun filled evening. 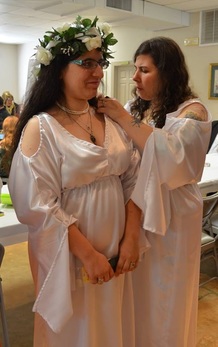 Saturday morning all gathered by 9:30 A.M. to prepare for the Investiture.  Lady Laurie Denman and members of Chosen Path Church provided a wonderful breakfast spread with many delicious homemade foods.  While waiting for the return of Lady Stephanie from her night of solitude and silence, participants of the Investiture dressed in their newly made Regalia, dresses and jewelry.

​Right: Rev Alyssa Maxon Kemp HP sews Rev. Elizabeth Hamilton into her dress before the ceremony. Gowns for the White Ladies and the Red Ladies were made by Rev. Ser Angela Munn HP (who notably was continuing to work on them in ICU while at hospital). Robes for the Black Ladies and Red Men were made by Rev. Laurie Denman HP. Because there were few and in some cases no occasions for fittings, some celebrants required spot fitting onsite. Despite these travails the regalia was wonderfully made -thank you Revs Angela and Laurie and Alyssa!

The Investiture Ceremony of M. Rev. Stephanie Neal, also called a Hallowing establishes Lady Stephanie in office as First Priestess Coregent of the Correllian Tradition. A Coregency is established when two people hold an office normally held by one alone, and are regarded as being both equally empowered.

Left: The Altar for the Hallowing ceremony. On the altar are pictures of previous Correllian First Priestesses now among the Ancestors. At the front of the altar is the banner of the Correll Mother Temple. To either side are Rev. Don and Rev. Stephanie's personal banners. All the banners are hand-made by Rev. Alyssa Maxon Kemp of the Order of Artificers 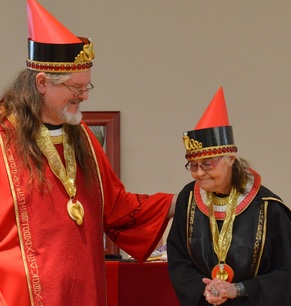 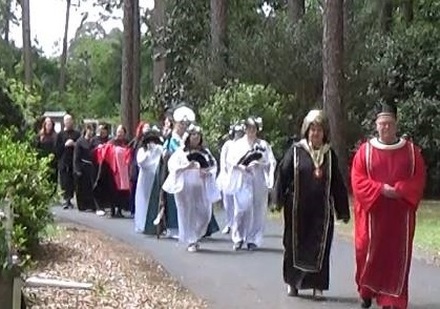 Entering The Temple, Lady Stephanie was greeted by The Red Ladies. Smudged, cleansed anointed and addressed with her four questions. She was brought into the circle and received by The First Priest. To see this (for many) once in a lifetime Ceremony go HERE 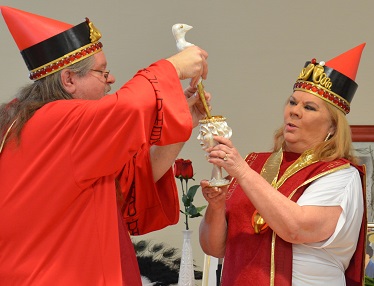 During the ceremony Lady Stephanie was literally bound into office alongside Lord Don and Lady Krystel. The ceremony featured numerous Oracles, culminating in Lady Stephanie's first Oracle as First Priestess. Then Lady Stephanie received red regalia, and enacted the Great Rite with Lord Don, using an Athame and Chalice hand made for the occasion and never used before. 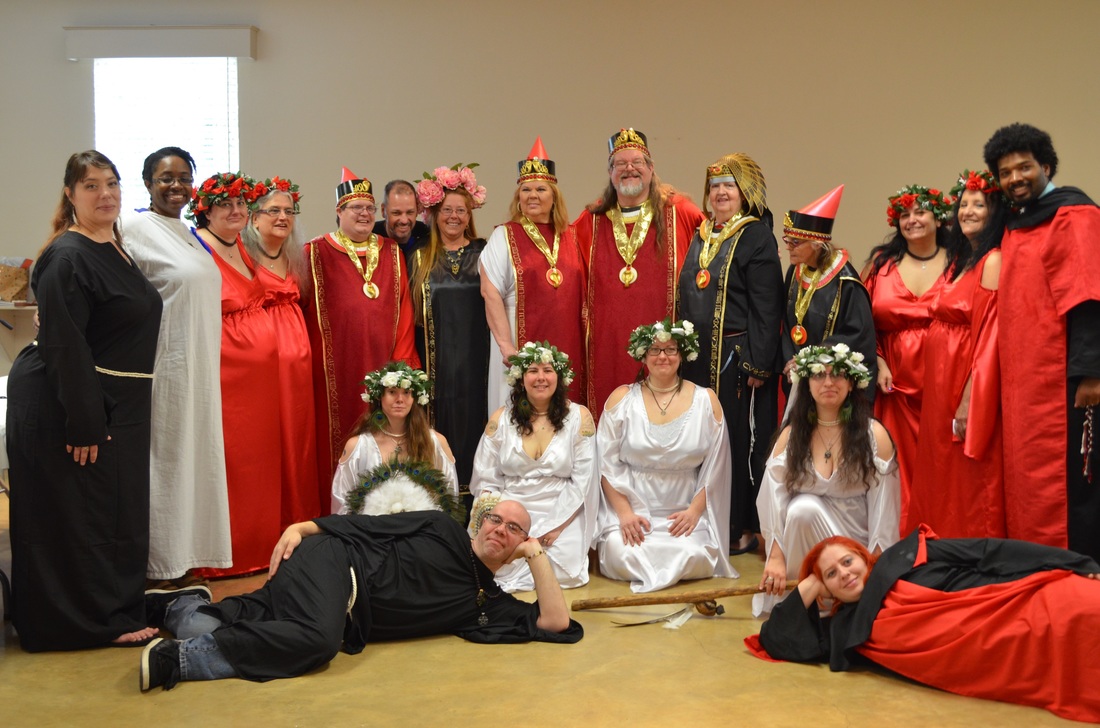