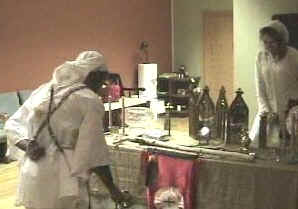 Houngan Lou and Mambo Lisa conduct a blessing ceremony from the Vodun religion at the Lustration of the Living.
Greetings all!

I am very pleased to say that the recent Lustration of the Living and Prophecy Conference was a great success and everyone who attended said that they enjoyed the experience very much. Hosted by Holy City Temple of Chicago, IL, the Lustration was held at the Life Force Arts Center, at 3148 N. Lincoln. The Life Force Arts Center is a beautiful class and event space belonging to Joan Forest Mage, who has been featured in many interviews on MagickTV over the years 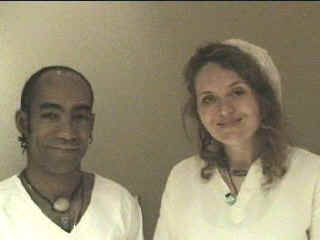 Houngan Louvel and Mambo Lisa of the Occult Bookstore. http://www.occultbookstore.com
The weekend began with a reception on Friday evening. The evening’s special guests were Louvel and Lisa of Chicago’s famous Occult bookstore, now celebrating its 90th anniversary!
Louvel and Lisa, who are old friends of Holy City Temple, are Priesthood in the Vodun religion –respectively a Houngan and Mambo. Houngan Louvel and Mambo Lisa performed an opening blessing from the Vodun religion intended to “open the door” to positive energies and shut out negative ones during the weekend. The blessing featured prayers in several languages, song and dance. It was a lovely, graceful ceremony and set the tone for what was to be the most interfaith oriented Lustration ever.
​September 4th is also the founding day for our educational partner Witch School, which is now in its eighth year. It is amazing to me how much Witch School has done in a mere eight years. Ranked as the highest trafficked Pagan website in the world by Alexa, which compiles such data, Witch School is now in 130 countries worldwide. Although Witch School teaches many other subjects as well, the Correllian Clergy classes offered through the Traditions educational partnership with the school have propelled Correllianism into a truly global movement. 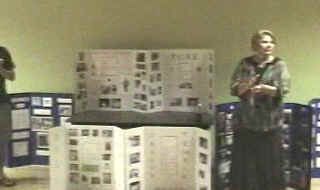 Lady Steff admiring the Temple display boards, where photos and reports from many Correllian Temples were displayed.
​Thirty years ago when Lady Krystel and I declared Correllianism a public Tradition, the members of the Correll Mother Temple expected this to mean only very limited, local growth – who could have imagined how much the world would change in thirty years, or how much Correllianism would grow with those changes? We were told by the Ancestors that these things would come, but how could we ever have fully understood?
​Later, I conducted an Ancestor ceremony in which invoked the Correllian Ancestors to watch over the weekend, and then asked each person to invoke their own Ancestors to join us 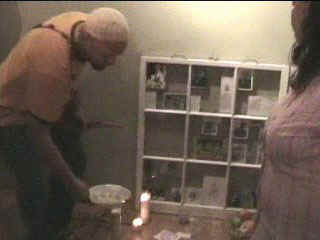 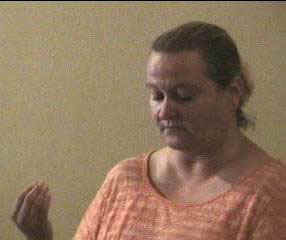 After dinner at the Golden Apple restaurant – a special treat for our Discordian friends – we spent Saturday evening conducting initiations and initiatory confirmations. 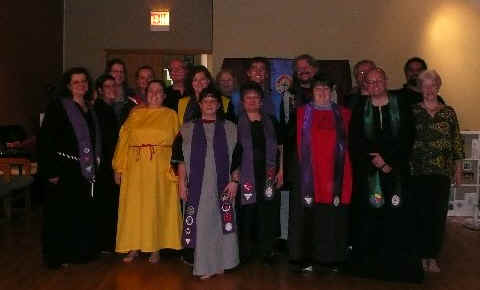 Group photo!
​Mark Mandrake of ESC acted as Guardian, and greatly enjoyed getting to use the Big Sword. Rev. Diana Jackson of Holy City acted as both Vocifer and Sonifer. Gretchen Broadhurst performed the cleansing and blessing of the circle as both Aquifer and Lucifer. Chancellor’s Herald Rev. Jason Highcorrell, HP, acted as Genevocator and Rev. Diane Lavendoski, HP, acted as Junovacator.  The Quarter Guardians were Rev. Jennifer Stafford in the East: Rev. Michael Barry in the South: Rev. Amanda W in the West: and Rev. Mike Neal in the North.
”The whole world stands upon the brink of a new day –the Dawn has begun, the Sun is rising! Greet the Sun with song and prayer and welcome the coming of the Day. And know that always the moment you are in is the best moment of all –for it is the moment you can work from! Do not worry if it is what you thought: do not worry if it is what you hoped: but rather make of it what you can! For all moments are One Moment! And always the question is: How will you use it?

”This year is a pivotal time, and the pivot is yet to turn. But we say to you that now is the time of our Working. Now is the time –not for preparation but for action! For many years we have been the midwives of the Turning of the Age. But no longer! Now we must be the Nannies of a newborn Age. And we must remember that the work is not done when the child is born, but rather only begins –and intensifies with time.

It is more important as Time goes forward to continue the Work: to expand the Work: to deepen the Work. And this we call upon you to do…within the next six months. ALL ROADS ARE OPEN TO YOU. For years you have cleared them. And now you must walk them. This then is the message of the Ancestors.”
​In addition, two Lustration Awards were presented.

The Order of the Golden Wand was awarded to Andre Smith, heroic South African police officer and member of the international Officers of Avalon. Andre was nominated because of his hard work as a police officer in a country that continues to be challenged by violence, both in the constantly ongoing sense and in regards to a recent series of murders. In recognizing Andre we also wish to voice our support for police officers around the world who work hard and often suffer to keep others safe. Congratulations Andre!
I especially want to thank all the members of Holy City Temple for all of their hard work that made this such a special Lustration.

After Lustration ended many of us again dined together at the Golden Apple restaurant. The general feeling among those present was that this was one of the nicest and most pleasant Lustrations ever, and that the family feeling that permeates our Tradition was very strongly felt at this event. It is wonderful to see ones family grow so large and to know that we can still all come together in love to honor the living and the spirits! Truly, that is a great accomplishment to achieve in thirty years as a public Tradition!

Many Blessings to All!