The Witchschool fall tour continues and we are really enjoying it very much. We are very grateful to the school for giving us the opportunity to make this trip and get to meet many of our local people in the western USA. It is a great opportunity for us to show our support for the students and members of the school, and our appreciation for all of your support over the years.

We really enjoyed our time at the Circle of Friends Shrine in Box Elder. If every place we stop on this trip is as wonderful as this, we shall have the time of our lives. Karla, Rob, Shelly, Donny, John, Echo, and Bill could not have been nicer to us, and we are very grateful for their kindness. Circle of Friends is a lovely Shrine with a great future in our opinion.

We left in early afternoon, later than we had planned but it was hard to leave. We hit the road and continued on from South Dakota into Wyoming. Along the way we encountered a bit of rain, but with it a breathtaking and very clear double rainbow. We were sure this must be a good omen.

We drove for several hours through beautiful terrain, stopping in late afternoon to go to the Devil's Tower. The Devil's Tower is an extinct volcano set amid the verdant hills of Wyoming. It is a truly unique site, unlike anything else we have seen. As we drove nearer we spotted groups of deer -I don’t think I have ever seen so many in such a short space of time-and a whole village of prairie dogs. The tower itself rises high into the sky, and is apparently a favorite site for climbers -some of whom we saw carefully ascending the side. It was very memorable.
​
One of the things we are all enjoying about this trip is the chance to see so many different places, and so much of Mother Nature's beauty. The world we live in is truly a remarkable place, and this trip reminds us of that very strongly. As Pagans we feel keenly our commitment to Mother Earth at all times, but seeing these magnificent places really drives home the importance of taking care of the Earth so that our children and their children will still be able to enjoy Her bounty.
​
We stopped for the night in Sheridan, Wyoming, and enjoyed a good nights sleep.

Thursday morning came and we headed out again. This mornings travels took us through the area of the Little Big Horn, which was very interesting. Although we didn’t stop at any of the historic sites we definitely felt the press of history.

We stopped in the town of Livingston, Montana, and had a bit of a setback -let us simply call it the "Diesel Incident" and say no more about it. After a couple of hours, some unexpected expenditures, and a great deal of hysterical laughter I prefer not to discuss, we were back on the road again, the Diesel Incident put behind us.

We were all overawed by the beauty of Montana. The mountains with their winding roads were simply breathtaking. As we moved from Montana into Washington we were struck by the lush green forests which clung, sometimes precariously to the mountain sides. Even after darkness overtook us, we could still get an inkling of the beautiful terrain we were passing through.

It was nearly eleven by the time we reached Moses Lake and Mystic Moonlight Grove. We had planned to arrive in time to attend the local "Coffee Cauldron" but after the Diesel Incident this proved more than we could manage.
In addition to painting spiders, Nepthys Set also raises them, and snakes as well.

We sat with Nepthys Set and talked for some time about her experiences as a Shrine, the local community, and our mutual friend Pete Pathfinder of the Aquarian Tabernacle Church with whom we will be meeting next week. We were very impressed with Nepthys Set, who seems to combine practicality and spirituality in a very positive way -just what a Temple Head needs.

Because of the hour we soon had to head for bed, so did not get to talk as long as we might have liked, but we looked forward to meeting the other members of Mystic Moonlight Grove in the morning.

One thing we are noticing very strongly in this trip is how much everyone feels like family -and so indeed we are. It is truly gratifying to meet so many nice people, and to know that as a Tradition we have such wonderful members. For this we are very grateful to Witchschool.com whose online program has allowed the Tradition to expand in this way, and which has attracted such excellent people.

I must tell you that when we first began Witchschool there were many nay-sayers. Ed and I heard time and again that it couldn't be done, and from some that it shouldn't be done. How wrong those people were! The people we have met through Witchschool are among the nicest and most competent people I know, and I am very proud of how things have gone.

Well, the hour having grown very late, I must sign off for now. Tomorrow we will meeting with the Mystic Moonlight Grove members, then heading out to Salt Water state park for the Spring Mysteries campout. We are really looking forward to it all.

We awoke this morning in the peaceful home of Rev. Nepthys Set of Mystic Moonlight Grove. I am struck by the sense of serenity and spirituality around Nepthys Set, and very impressed by it. I am also struck by her talents, which we saw more and more examples of as the morning unfolded.

For those who don’t know, Mystic Moonlight Grove was just deemed as a Temple at the recent Lustration. Being a new Temple we expected them to have some idea of what they were doing, but also to still be finding their way. We were rather surprised by how well organized and socially active they were. Of course we knew about the Coffee Cauldrons, the MMG newsletter (the Myst-Arcana, and other Temple activities which were just reviewed in the deeming. But to be here in person and see what all they are doing was most impressive. And, just as in the Circle of Friends Shrine, everyone was very nice and seemed very competent. 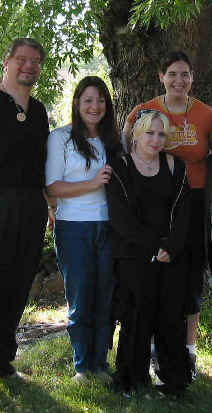 Nepthys Set had spread out a wonderful breakfast for us including her home-made zuchini bread, fresh fruit and scrumptious pastry -as well as some of that famous Washington state coffee. Later in the morning this would be augmented by home-made root beer -a rare and unusual treat and simply delicious!

We discussed all manner of subject, notably the local community and its needs. Mystic Moonlight Grove is a very active Temple with many irons in the fire, and a commitment to community building whose chief expressions include their Coffee Cauldron social gatherings. The are also a fun group, whose members have a wonderful chemistry between them.

Left: Rev. Don, Rev. Nepthys Set, Felicia, and Annie.
We really didn’t want to leave, but we had to be in Salt Water state park by evening, and so by early afternoon we had to say our farewells. But not before Nepthys Set gave us two bottles of her home-made peach wine: one a gift to the Mother Temple, the other to be used at the initiation scheduled for Monday night at Our Lady of the Sacred Earth Witan Shrine.

We also received one other gift from Mystic Moonlight Grove -a new traveling companion. Nepthys Set has two pet snakes and many pet tarantula's. One of the latter is now in Rev. Jason's care -a curly haired tarantula whom Jason has named Keri.

We now set out for the Seattle area. The mountains in Washington state are glorious, and the so the trip was one of awe for we who had never seen them before. It was one of our shortest days of driving so far, and it was just late afternoon when we arrived at Salt water state park. 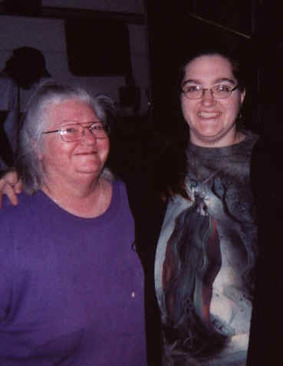 Above: Carmen and Rev. Iris
We were greeted by Dragon/John, the Chief Priest of Our Lady of the Sacred Earth Witan Shrine who helped us get settled in. The camp site was very beautiful, with a wonderful view of Puget Sound. Rev. Jason dutifully helped set up our tents, and then we set about exploring.

In addition to John, who is very interested in our budding Order of Paladins, we soon met Leo -a charming young man who was to enact the part of Hermes in the Spring Mysteries ritual play which gives the gathering its name.

Soon Rev. Isarma, Head of the Shrine, arrived. Isarma is friendly, outgoing, and in constant motion. From the time she arrived until late at night it seemed she was always busy -as is usually the case with a festival organizer. With Isarma was her mother Carmen -a fascinating and dignified lady who oversaw the preparations for the nights feast. It seems that mother and daughter have been active for many years in the local SCA community, and have much experience in preparing feasts for large groups of people, and I can tell you that their cooking is wonderful! 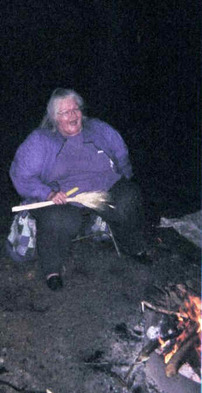 As the evening progressed the camp site began to bustle and more and more people arrived. Glenn and Sharon, who act as Firetenders at the Burning Man festival arrived. Glenn and I enjoyed comparing taste in Filk music, and Sharon began busily recruiting people to join her for a game of something called "Dalmuti". We also met Bill and Kathie, who first mentioned to us an organization called Pagan Ocean.

Soon Sharon has gotten her game of Dalmuti together and I must say I watched this game unfold with some fascination. I am not entirely sure of how it works, but it involves greater and lesser peons, something called dalmutis, and a great deal of recitation of poetry, spinning, and curtsying. Most interesting to watch.

​Above: Carmen, Rev. Isarma's mother, sitting at the campfire

At midnight the festival started in earnest with the beginning of the mystery play. A
candle-lit procession led down a ridge to an open-air ritual area overlooking the Sound.
​
The play began with the Goddess Demeter, played by Carmen, addressing herself to the her brother Zeus with a demand that her daughter's marriage to Hades be annulled. Zeus refused this, and Demeter and Hermes resolve to end the marriage by destroying the God of the Dead. This is a very unusual variation on the story of Persephone and Hades, and was most interesting in its approach. After being told that the play would continue next day, we returned to camp where some sat up and drummed and sang and some (a tired me) retired for the night.

Right: Rev. Isarma as Persephone in the midnight Mystery Play