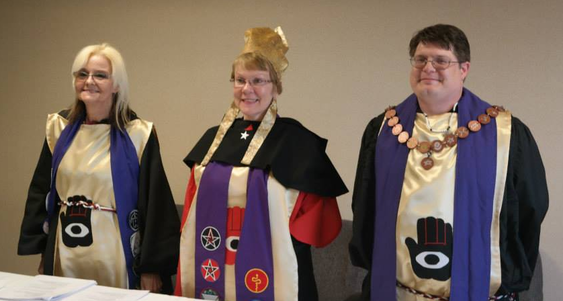 Templar Grand Deemstress Rt Rev Ser Angela Munn with Templar Deemsters Pro Tem First Elder Rt Rev Windy Lajoie and First Director Rt Rev Ser Jason Highcorrell from the Deemsters' Court during the Lustration of the Ancestors Year 14 Aq. Note that Ser Angela wears a red hand sigil, while Lady WIndy and Ser Jason wear black hands.
​The Correllian Order of Deemsters is the judicature of the Tradition. The purpose of the Deemster is to  investigate and propose or carry out solutions to problems affecting the Tradition, at the direction of the Chancellor. Some Deemsters are appointed as a permanent office to oversee such things as the Membership Office and the Temple Making Process. 'Permanent' in this instance means a long-term appointment, not a life appointment. Other Deemsters are appointed Pro Tem, that is to serve for a single occasion.

There are fields of Deemstry, listed below, some of which are common and others very rare. 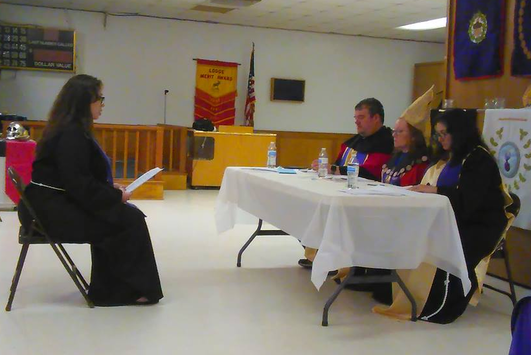 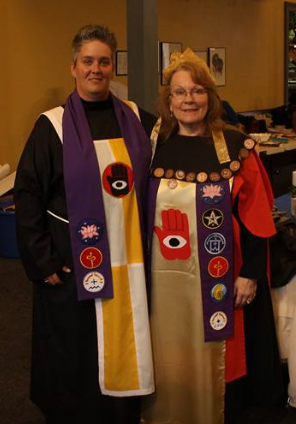 Deemsters have specific robes. These may be worn by any Deemster making a public appearance in this role, and especially if holding a public hearing, but in fact are generally worn exclusively by the Templar Deemsters as other Deemsters do not generally hold public meetings at present.

Left: Templar Grand Deemstress Rt Rev Ser Angela Munn with Rev Meranda Favro, at the Lustration of the Ancestors Year 17 Aq. Here you can see the red hand sigil on Ser Angela's tabard very clearly. Rev Meranda serves as Herald to the Deemsters' Court and is wearing a particolored Herald's tabard with the sigil of the Order of Deemsters displayed.