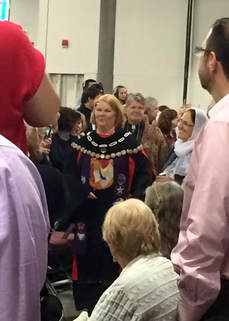 The Correllian Tradition is preparing for the 7th Parliament of the World's Religions, an event we have participated in since 1991, through volunteer work of our traditions members. The Parliament is a important part of our outreach, to find acceptance and equality among the world's religions. For the next year, the Correllian Wiccan Tradition will be seeking common ground with Wiccans, Pagans and other faiths in order to share our truths at the next parliament's  theme, “The Promise of Inclusion & the Power of Love: Pursuing Global Understanding, Reconciliation, and Change”.

PARLIAMENT PROJECT - PAGANS TO THE PARLIAMENT - click HERE
Help support the Tradition's Mission to the Parliament of the World's Religions in Chicago in August of 2023. Learn more below or click through to support!

PAGANS TO THE PARLIAMENT GROUP RATE REGISTRATION - click HERE
Are you coming to the Parliament of the World's Religions in Chicago in August of 2023?
​If so this is how you can be included under the Tradition's Group Discount! 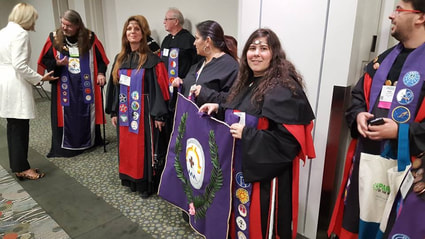 Rev. Alyssa Maxon Kemp holds the Correllian banner during the opening plenary of the Sixth Parliament of the World's Religions
As The Tradition is committed to a global community, a faith that extends beyond borders to create spiritual family, we will be sending a large contingent of members to the parliament including our First Priest and Priestess. They will focus on representing the Wiccan faith, as a global inclusive faith, seeking the Promise of Inclusion for all our members, Seek the Power of Love among the world's faiths, gain understanding of all faiths while providing education for others, seek reconciliation for all who are called Witch and Wiccan, so we can change the world to allow us as a Tradition to practice freely at every point in the world. 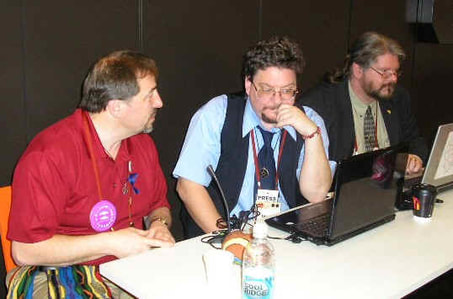 L to R: Rev Ed Correll (Center) and Rev Don Lewis (Right) broadcasting live from the Fifth Parliament of the World's Religions, in Melbourne, AU, with guest River Higginbotham (Left)
Over the next year, The Tradition will be asking questions and seeking answers that help create understanding.

In this we will be utilizing our social media to ask daily questions, through the pages of The Daily Spell and Witch School International.

|We will be doing specials on Pagans Tonight Radio, Magick TV, and other outlets.

We will be hosting a live Samhain Ritual from Toronto on October 31st, 2018.

We will be providing new coverage from the Parliament starting November 1st, 2018.
​
In these ways, we as a tradition and a faith, will actively participate and share in “The Promise of Inclusion & The Power of Love'  that participating in the 7th Parliament of the World's Religions offers.

If you would like to help support our mission to the Seventh Parliament of the World's Religions, use the donation button below. The Correllian Church is a 501(c)3 religious organization, so donations are tax deductible.