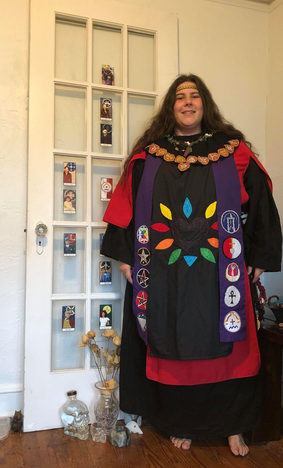 ​
​Rt. Rev. Alyssa Maxon Kemp is a Correllian Arch Priestess and Elder. She is the Head of the Dancers of Shakti Temple, Tabula Rasa Personal Shrine, and the Order of Artificers, and holds the positions of Armorial Grand Deemstress and First Elder. She is also a degree mentor for Correllian Educational Ministries through WitchSchool. 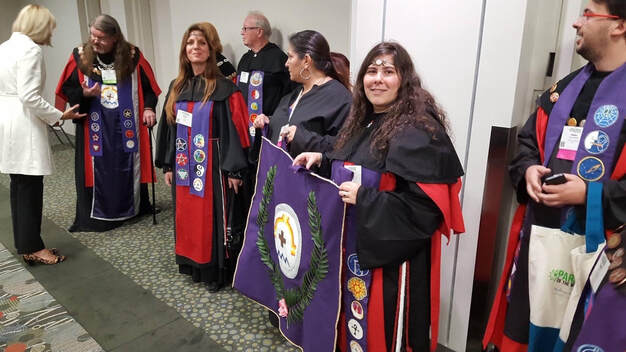 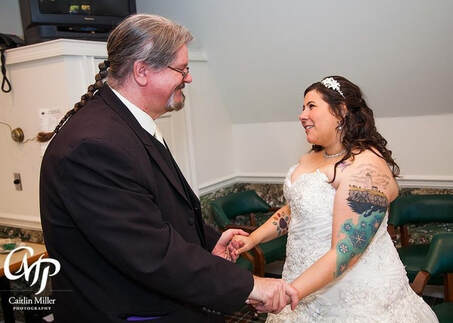 ​Above: Rt. Rev. Alyssa with the Correllian Delegation to the Parliament of World Religions in Salt Lake City Utah in Year 15 Aq (2015 CE).  She is holding a Heraldic Banner she made by hand for the event.
​
Lady Alyssa was born in Greenwich, Connecticut in the fall of Year 1585 Pi (1985 CE), where she lives today. In mundane life, she is a wife, mother, Licensed Massage Therapist, and Certified Biodynamic Craniosacral Practitioner. She is the adopted niece of Correllian First Priest and Chancellor M. Rev. Donald Lewis-Highcorrell, and as such is a member of the Mabelline branch of the High-Correll family. 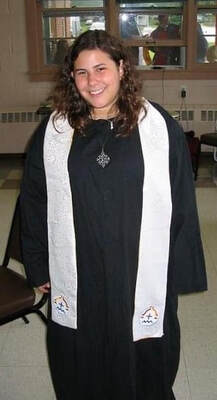 Left: Rt. Rev. Alyssa just prior to her First Degree Initiation at the Lustration of the Living Year 6 Aq (2006 CE) in Piqua, OH

​As an Artificer, Lady Alyssa is the premier crafter of Heraldic Banners for the Tradition and the author of the Correllian Heraldry booklet. She first began crafting banners in Year 11 Aq (2011 CE), and continues crafting them to this day. She became Head of the Order of Artificers in Year 13 Aq (2013 CE). Founded by Rev. Dragonfly, this Order is the crafting Order of the Tradition, and its members are responsible for making Tradition Heraldry, Regalia, ritual tools, Sigils, and crafts of all kinds.
Below: Rt. Rev. Alyssa poses in front of a wall of Heraldic Banners that she made by hand at the Lustration of the Ancestors Year 14 Aq (2014 CE) in Danville, IL 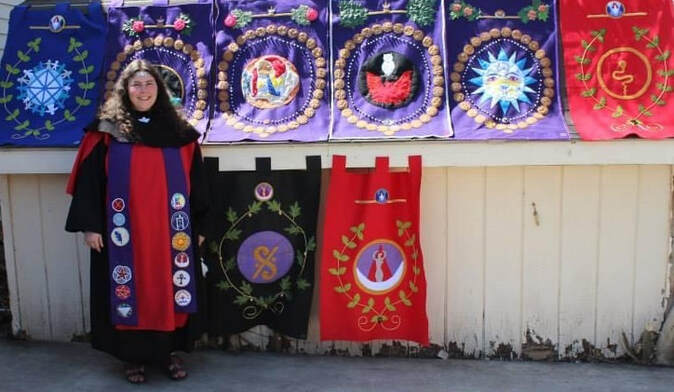 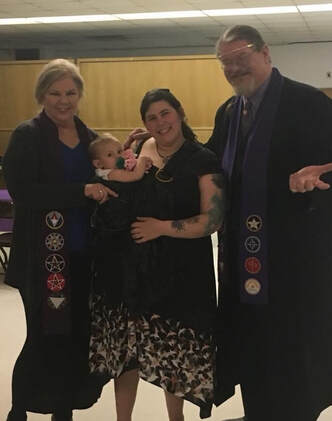 ​
​​Lady Alyssa was made an Arch Priestess of the Tradition in Year 17 Aq (2017 CE), while nine months pregnant with her first child, who was born 12 days later and named Mable after the Beloved Ancestor and First Priestess, Mable Sandberg-HighCorrell. In Year 19 Aq (2019 CE) she was installed as Armorial Grand Deemstress of the Tradition, responsible for all Correllian Heraldry, Regalia, and decoration. 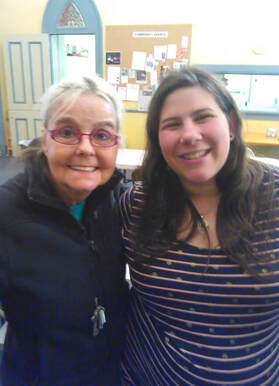 In Year 20 Aq (2020 CE) Lady Alyssa was acclaimed as the Acting First Elder of the Correllian Tradition, after the former First Elder, Rt. Rev. Ser Ed Hubbard, retired in office. Retired in Office, Ser Ed returned to service as First Elder after the crossing of Blv. Rt Rev Windy Lajoie. Ser Ed agreed to remain as First Elder until the new First Elder became apparent, and will now return to retirement, though he remains a member of the Council of Elders and Paladin General. In advancing her for the office Ser Ed said that he regarded Lady Alyssa as only possible successor.

Above: A picture of Lady Alyssa, heavily pregnant, posing with then First Elder Rt. Rev. Windy Lajoie at Lustration of the Ancestors year 17 Aq (2017 CE) in Stamford, Connecticut. 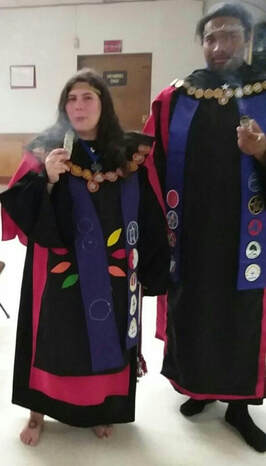 Though not commonly used Lady Alyssa's full titulary is:

Her Right Reverend Excellency Alyssa Maxon Kemp First Elder of the Correllian Tradition, Arch Priestess and Elder, Member of the Witan Council, Princess of Blood and Faith, Armorial Grand Deemstress of Tradition, Head of the Temple of the Dancers of Shakti and  Tabula Rasa Shrine

Right: Rt. Rev. Alyssa preparing for a night of Initiation Rituals with Rt. Rev. Ser Phoenix Coffin-Williams at The Lustration of the Ancestors Year 18 Aq (2018 CE), in North Carolina.