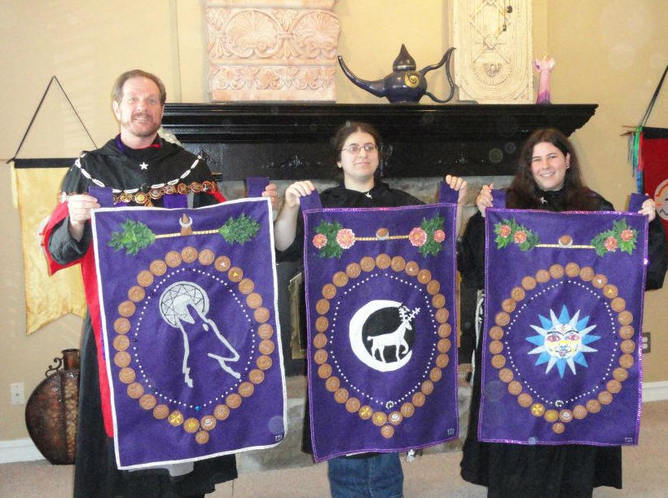 Rt. Rev. Terry Power, Rev. Liz Hamilton, and Rev. Alyssa Maxon display three of the heraldic banners that Rev. Alyssa created and presented during the weekend. These banners are for Rev. Terry, Lady Krystel the retired First Priestess of the Tradition, and Rev. Don. There were also banners for new First Priestess Lady Traci and for Sacred Sea Temple itself.
​The Lustration of the Ancestors for Year 12 Aq. was hosted by Sacred Sea Temple of Powder Springs GA. Lady Stephanie and her people did a wonderful job with the Lustration, as they do with everything they undertake, and a great time was had by all! 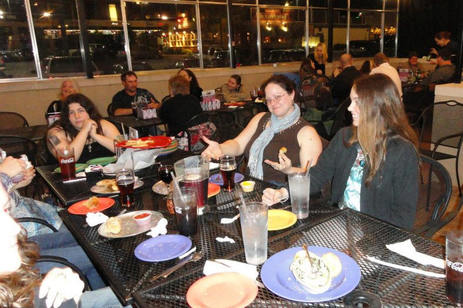 Some of the diners at Friday night's feast!
​As usual people began arriving several days before Lustration weekend actually began, eager for the chance to catch up with old friends.

The first formal event of the Lustration was a feast held on Friday night at a local Mexican restaurant. Even though not everyone had yet arrived, the Lustration feast completely filled the restaurants event room. It was a wonderful feast -the food was great but of course it was the company that made it spectacular!
On Saturday morning we had the Temple Deeming ceremony. There were four groups up for Deeming on this occasion. All four were going for full Temple status.

Retired First Priestess Lady Krystel was originally expected to attend this Lustration, and many aspects of it were staged specifically in her honor, but unfortunately her health did not permit her to attend.

During the presentations that followed the Deeming on Saturday afternoon, Lady Stephanie designated a chair to represent Lady Krystel, so that she could have a visible as well as spiritual presence at the event. 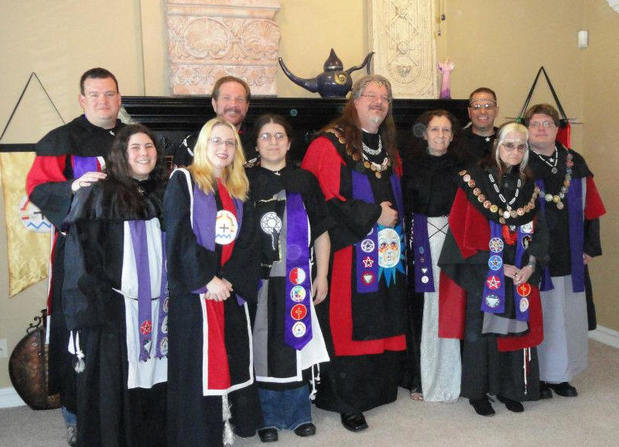 On the lanai followed line dancing and general merriment.

After a break, we reassembled at the Caroline stage for a play created and performed by Sacred Sea Temple members.

Named for Tradition founder Caroline High Correll, the Caroline stage was build by Rev. Mike Neal and has been the site of many concerts and other entertainments. 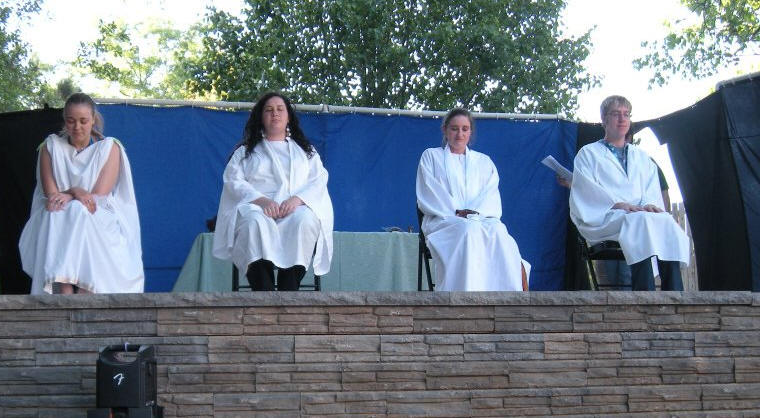 The play chronicled the adventures and misadventures encountered by four Dedicants during their year and a day or Dedication.

​After the play came initiations. The presiding Clergy gathered in the gala tent while those being initiated were set to meditate. Those who were not involved in the meditations held a drum and dance circle in the Lewis Courtyard.

The initiations of course cannot be described, lest we ruin the experience for future initiates. But the ceremony was wonderful and it is always a tremendous pleasure to welcome new people to the Tradition, and to witness people's progression within it. Congratulations to all new Dedicants and Initiates! 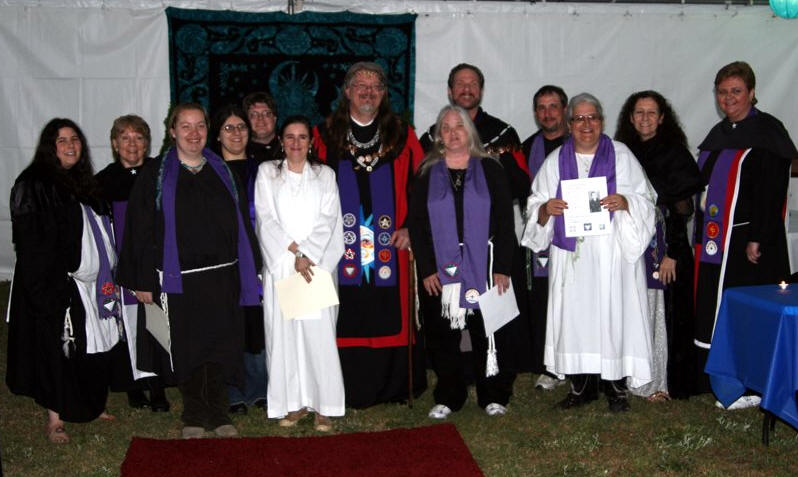 Partial group photo, after initiations on Saturday night. L to R: Rev. Alyssa Maxon, Rev. Angela Munn, Jessica Dunn, Rev. Liz Hamilton, Trina Williamson, Rev. Don Lewis, Rev. Phoenix Firestar Rising, Rev. Terry Power, Rev. Anthony Bravi, Rev. Laurie Denman, Rev. Holly Charland, and Rev. Sheila Long.
​After the initiations we all joined in the dance and drum circle that had been going on at that point for several hours. The circle had begun at dusk, but went far into the night. Not only constant drumming, but frequent singing and dancing made the drum and dance circle a very festive and enjoyable occasion.

Despite the Georgia heat a small bonfire burned in the center of the circle, and throughout the night people would spontaneously dance around this. 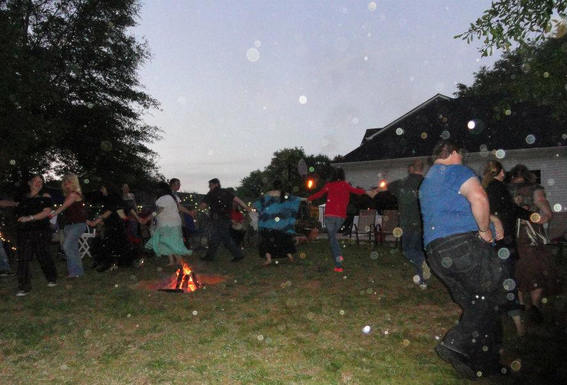 As darkness descends on Saturday night, the drum and dance circle begins.
​Perhaps the most striking performances of the evening were the fire dancers, who only began to perform late in the evening. Dancing with fire poi or with lighted firebrands, they lit up the night with their exciting movements. 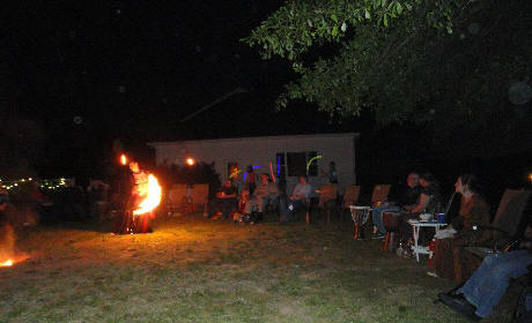 The Fire dancers begin to perform during the Drum and dance circle.
​Next came the Cleansing and blessing. Katell Desormeaux enacted the cleansing and Matt Haecker the blessing, creating a very beautiful and unique impression, using energetic techniques from Eastern martial arts. 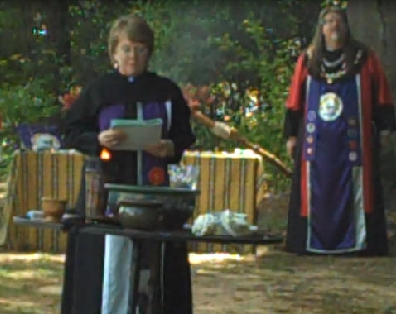 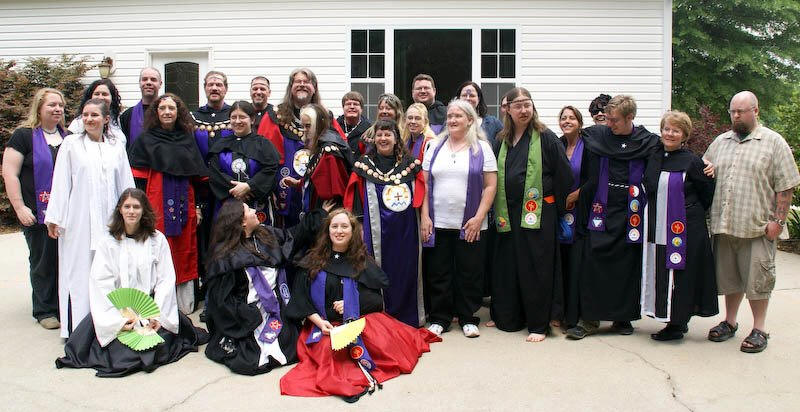 Partial group photo after the Lustration ceremony, with the Sacred Sea Temple building in the background.
​A number of announcements took place during the toast, including the outcome of the weekend's Temple Deeming: 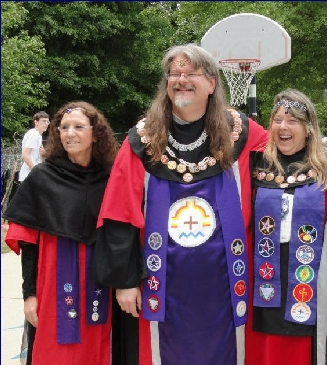 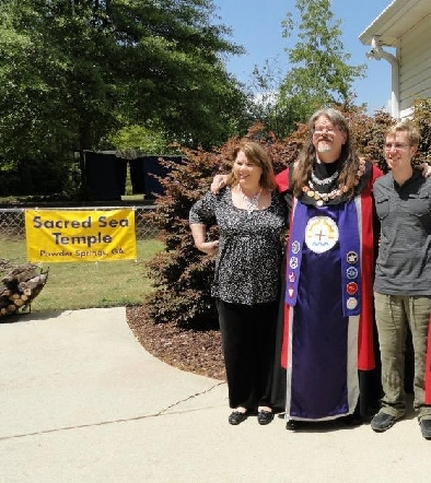