LUSTRATION OF THE ANCESTORS 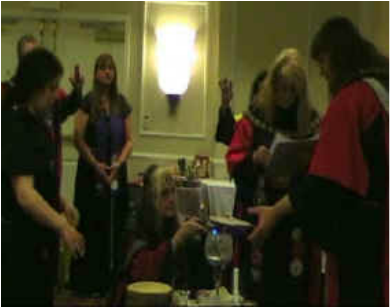 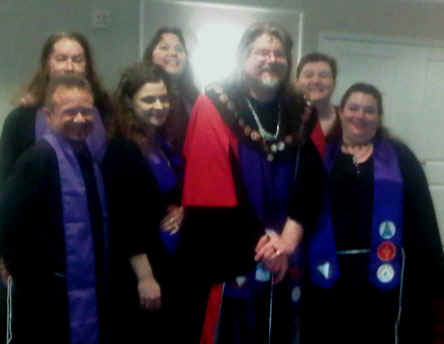 Saturday evening the Lustration Silent Auction ended. This Silent Auction was the largest yet, with all manner of wonderful items donated by Correllians for the benefit of the Correllian Tradition. Run by Rev. Mike Neal, who always does a superlative job, the Silent Auction is a great way to get some beautiful items and support your Tradition at the same time! 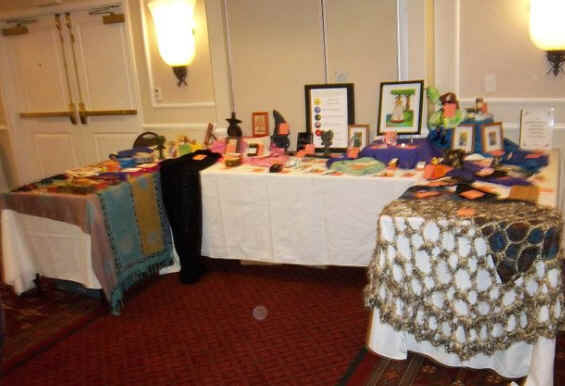 Table displaying items for the Silent Auction.
​At 7 PM on Saturday those members of the Witan present at the Lustration gathered for a meeting of the Council.

The two Mikes, Rev. Mike of Sacred Fire Temple and Rev. Michael of Sacred Sea Temple, acted as Heralds to the Chancellor for the event.

As a rule the Witan does not do any actual business at Lustrations, because so few of the members of this international body are likely to be present at any given Lustration, but Lustration Witan meetings are often the occasion of important announcements, as well as occasions to make proposals or discuss policy.

At this meeting a number of important announcements were made, the majority of which were in the form of a letter from the Council of Elders. You can see the actual announcements on video HERE. The text of the letter follows below:
To: The honored members of the Witan Council

As you may know the Council of Elders have resolved for several years to accept no new Council members who have served the Tradition for fewer than fifteen years. We feel that this rule has kept the Council of Elders stable, but it has also made it very difficult for the Council to expand, as only a small portion of our Priesthood meet this criteria. As the Council has grown older, and several members have entered into poor health, the issue of expanding the Council has become an increasingly important one. 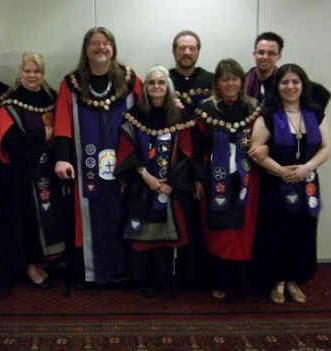 Members of the Witan Council present at Lustration: Rt. Rev. Stephanie Neal HP of Sacred Sea Temple, Rev. Don, Rt. Rev. Windy Lajoie HP, Rt. Rev. Terry Power of Celtic Cross Temple, Rev. Janice Nalis HP of Children of Gaia Temple, Rev. Eblis HP of Dragon Temple, and Rev. Liz Hamilton of Dancers of Shakti Temple.
On April 1st, Year 11 Aquarius, in order to better prepare the Correllian Nativist Tradition for the future, the Correllian Council of Elders unanimously agreed to create a new position of Provisional Elder. This position will confer all of the duties, rights, and privileges due to an Elder of our tradition, but may be removed  by either the First Priest or First Priestess, or by a 2/3 vote of all Vested Elders, for any reason of their choosing. Upon their fifth year of service as a Provisional Elder or upon their 15th year of Service as an initiated Priest/ess of the Tradition, the Provisional Elder will be eligible to become a fully Vested Elder.

This position of Provisional Elder will be continued until we have a established a stronger and healthier council, and will remain in effect until March 31st, 2021. At that time the Elder Council will once again convene to consider continuing or ending this rule.
​In addition to this expansion of the Council of Elders, Correllian Chancellor M. Rev. Donald Lewis also announced some changes in the standing of the existing Vested Elders.
​In addition M. Rev. Krystel High-Correll, First Priestess of the Correllian Tradition, has already been in retirement for several years now. As Retired First Priestess Lady Krystel does and always will enjoy the same level of respect and dignity that she has born for the last three decades of her imperium. Now, after much consideration, we are pleased to announce an Heir to the office of First Priestess: Lady Krystel and the entirety of the Council of Elders are pleased to name Rt. Rev. Traci as Heiress and Acting First Priestess, in accordance with the Rules of Succession of the Correllian Tradition as outlined in the Tradition bylaws. May the Blessing be upon the Acting First Priestess!
​We are confident that these changes will help the Correllian Tradition to better meet the many challenges that face us as a global Tradition. We hope that you will join us in welcoming all of the new Elders and the new Officers of Tradition.

Following the Witan meeting we were treated to a second wonderful concert from the very gracious and talented Wendy Rule! 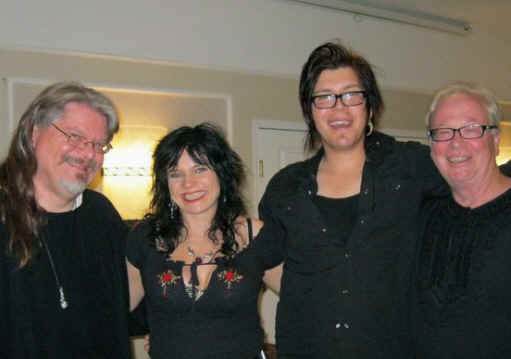 Sunday morning brought the Lustration ceremony itself, always the highlight of Lustration weekend.

Rev. Karen Kelly of Sacred Moon Garden acted as Guardian for the East.
​The First Priest of Tradition, M. Rev. Donald Lewis, enacted his own role in the ceremony and brought through the Oracle, which is of course one of the most important aspects of the rite.

The Oracle for this Lustration was:
"We say to you that the Dragon stirs beneath the surface of the Earth, and the wind in the air. We say to that the Dragon stirs among the stars, and the world is changing even as you watch. Behold -the future is the past, but it is different from the past and it will never be quite the same again. All things repeat, but they never repeat exactly. The roads that you are walking are familiar, and totally new at the same time! As you go forward you may not feel the changes that are unfolding, but they unfold beneath your feet as you walk.
​
"The nature of the world you are living in will be so different by the end of this year -even more so in the coming year- that if we told you all that will come to pass you could not comprehend it. The very way you speak to one another will be different by the time we speak in Africa. The great ones of this world will be different by the time we speak in Africa. In every land the rivers are running -of thought, and word, and spirit. And wherever they are running they are cutting new roads, and you will see these roads unfold before you. You will not know what to think of them, but if you WALK them, you will understand them.

​"The world is becoming a better place through these things, but as they happen...many blockages are being removed. For many there is fear and pain, but if you watch you will know happiness in these changes. You will see...mountains rising up, islands swallowed by the waters, within the culture of humanity. And you -our children- will be among the mountains, not the islands: though you may not know it as the mountain rises. You will see the Gate is open, the way IS unblocked, and you are moving forward. Beloved Ones, we have come before you but we walk with you now -we go through this gate together and into a future where so many things are unfolding that we have spoken of, which you have worked for, that everything will be different. These then are our words to you."
​There were many announcements made during this Lustration, including announcing again all of the newly acclaimed Elders and the new First Elder and First Priestess Elect. We also announced the results of Friday evenings Deeming session.

The results of the weekend's Deemings were as follows:

Temple of the Trees Witan Shrine
Rev. Connie Blankenship
Advanced to Proto-Temple
​All in all this Lustration was a great success and was much enjoyed by everyone present. It was a weekend of momentous changes and many happy hours as well. We thank Rev. Mike and the members of Sacred Fire Temple for making this such a pleasant and memorable experience!

We look forward to next years Lustration of the Ancestors, which will be hosted by Sacred Sea Temple in Powder Springs, Georgia!