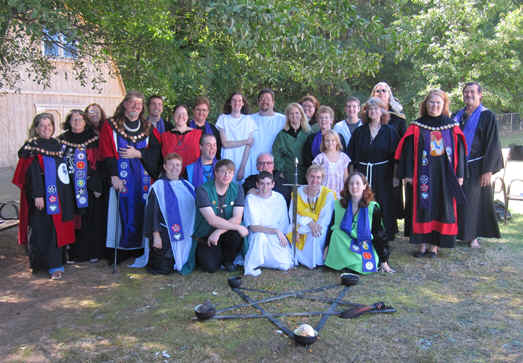 Group photo of Lustration ceremony participants
​As you may know the weekend of September 4-5 marked the first Correllian Regional Lustration. The Lustration ceremony, intended to cleanse and bless the Tradition, was a traditionally one of the ceremonies conducted by the Correll Mother Temple in honor of the Correllian Ancestors. Since Year 2 Aq. (2002 AD) we have held central Lustrations twice yearly – initially in the Correllian heartland of central Illinois, and later in widely varying locations. As of this year we have decided to move the Lustration of the Living to be a regional event, occurring simultaneously in numerous locations, while retaining the Lustration of the Ancestors as a single central event each year. 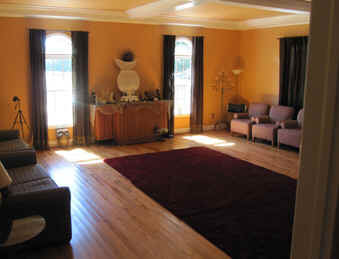 The Pearl, principle ritual room at Sacred Sea Temple
​The first ever Regional Correllian Lustration of the Living was held by Sacred Sea Temple, of Powder Springs, Georgia, and served the southeast region of the US. Although it was the only regional Lustration this year, we hope that it will serve as inspiration for many next year. All that is needed for a Regional Lustration is one or more Temples working together with a High Priest/ess to bring through an Oracle. 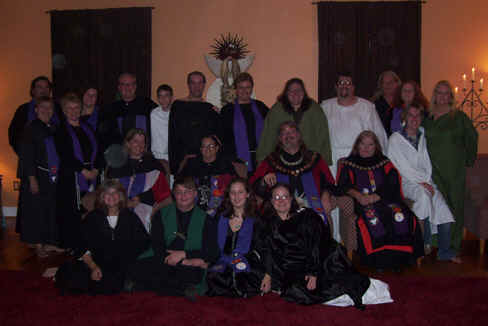 Group photo after initiations including Officiants, Initiates, and Dedicants
​The initiations went very well. New Initiates included Rev. Alex, Rev. Davey Fortney Jr., and Rev. Caithlyn. New Dedicants included Rhonda, William, and Matt.
​After the initiations there was birthday cake for Dedicant Bradley Knebel who was celebrating his twenty-fourth birthday. Happy birthday Bradley! Then followed drumming and dancing in The Pearl until late in the night.

Drumming in The Pearl after initiations Saturday night
​Sunday was of course the Lustration itself. The ceremony was enacted in the Lewis Courtyard. Rev. Mike Neal acted as Guardian. Dedicant Rob and Dedicant Wesley cleansed and charged the circle. Then Rev. Mandy performed a special cleansing and purifying dance to complete the preparation of the sacred space. Rev. Michael acted as Genevocator and Rev. Amanda acted as Junovocatrix. I myself too the role as Presiding Priest and Lady Stephanie Neal of Sacred Sea joined me as Presiding Priestess. 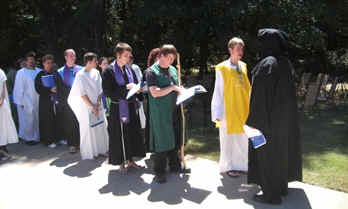 The entry procession forming up before the Lustration ceremony 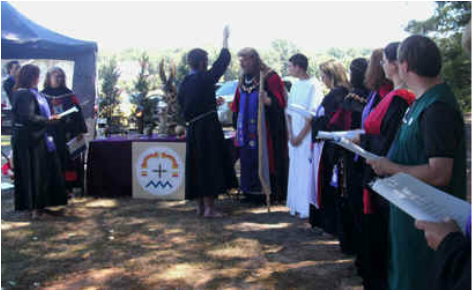 Rev. Michael Barry acts as Genevocator to Rev. Don during the Lustration ceremony
​Next came our awards. We have for several years made it our custom to give awards acknowledging the hard work of people within our Tradition, so that they can be shown the appreciation and recognition that they deserve! In this cycle our awards are: The Order of the Golden Wand to Rev. Michael Kotch, in recognition of his good work with the Officers of Avalon: The Order of the Iron Pentacle to Rev. Morghana Silkmoon in recognition of her mentoring, ritual work, and teaching –and most especially in recognition of her providing a point of contact for the Portuguese speaking members of our Correllian family! The Order of the Thurible to Rev. Krysty Underwood and Rev. Rebecca Doolin in recognition of their work in ritual leadership.
​Following the Lustration ceremony was a lavish feast on the lanai, which will be remembered as the Feast of the Butterflies. I have never seen anything quite like it. Several extremely friendly butterflies blessed members of the assemblage by landing on them and remaining with them without fear. Rev. Mandy, Matt, and Rev. Bill Grimes were all marked in this way.
​After the feast followed the First Southeast Regional Correllian Clergy Roundtable, in which we assembled in The Pearl to discuss issues of interest to Correllian Clergy and to the southeast US region in particular. It was a very positive meeting, which helped to cement many of the new connections established during the weekend. 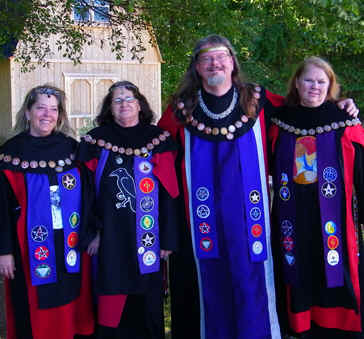 Four members of the Witan Council present at the Regional Lustration: Lady Janice of Children of Gaia, Lady Virginia of Selu, Rev. Don, and Lady Stephanie of Sacred Sea
​All in all it was a wonderful weekend and a most memorable Lustration! Thank you everyone at Sacred Sea and all who attended!