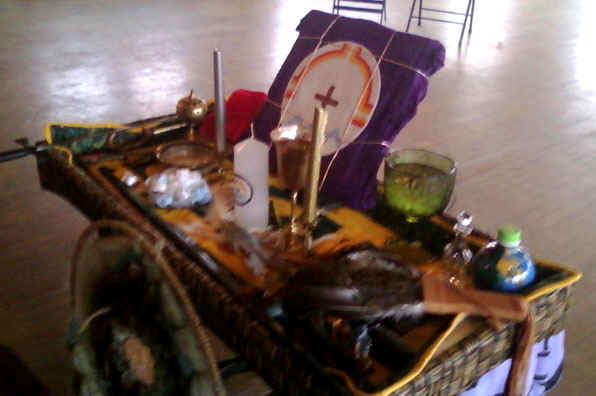 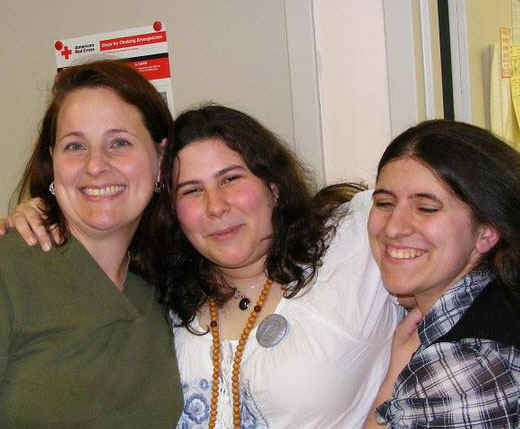 Marcie, Alyssa, and Liz.
We are very grateful to all of the many people who attended, especially those who came such long distances to attend. Among the guests were Rev. Citrine from Australia; Rev. Diane Lavendowski HP, Rev. Terry Schall, Rev. Liz Hamilton, and Tony from Pennsylvania; Rev. Alyssa Maxon from New York; Terry Power from Canada; Rev. Dorothy 2Spirits Levan, Rev. Jason Highcorrell and Rev. Jai Elliott from Illinois; Rev. Green Owl from Missouri; Rev. Michael from Texas; Rev. Marcie Vonderwell-Hull from Ohio; and Rev. Litha from Minnesota. My son John also attended for the first time.

​We were also very honored to by joined by Adam, a seminarian from a Quaker seminary, who added a great deal by his presence.

Sadly several people who were expected were unable to attend at the last moment due to family tragedy. Rev. Freyatru from the United Kingdom had also been planning to attend but was prevented by the volcano.
After dinner came a meeting of those members of the Witan who were present. A variety of subjects were discussed which will be taken on to the full Witan in coming weeks, including the need for increased security safeguards in the Clergy Making Process including background checks, a Traditionwide policy for Temples dealing with young people, a new Clergy Handbook, the possibility of changes in or additions to our existing Degree system, and in general the ongoing need to keep up with the times and evolve.
Sunday began with the Lustration Rehearsal at 10 AM, followed by the actual Lustration ceremony at noon. 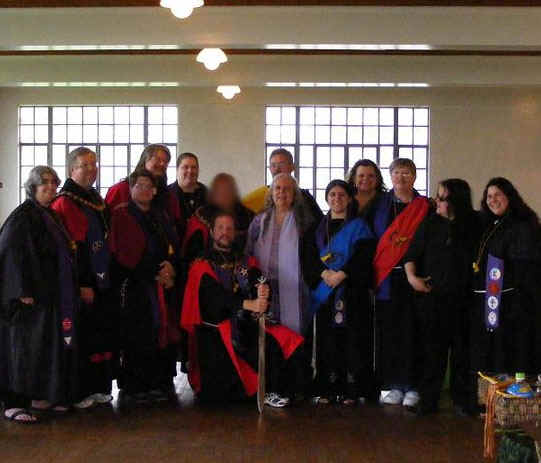 A group photo taken after Lustration shows many of those who took part in the ceremony along with Lady Selena.
Rev. Terry Power HP of Celtic Cross Temple served as the Guardian. Rev. Alyssa Maxon of Tabula Rasa Shrine acted as Sonifer. The Vocifer was Rev. Aine Massie HP of Crystalline Star Temple. Adam, our Quaker guest, acted as Aquifer while Rev. Pete Hertzberg HP of Northern Lakes Temple acted as Lucifer. Rev. Jai Elliott of PURE Sanctuary Temple acted as both Junovacator and Genovacator. The Quarter Guardians were enacted by Rev. Michael of Sacred Fire in the East, Rev. Terry Schall of Spiritual Manifestation in the South, Rev. Elizabeth Hamilton of Dancers of Shakti Temple in the West, and Rev. Diane Lavendowski, HP, of Spiritual Manifestation in the North. The Great Rite and Joint Charge were enacted by Rev. Citrine of Aurora Australis as Rite Lector, Rev. Jason Highcorrell HP and Rev. Jai Elliott, both of PURE Sanctuary Temple, as Rite Priest and Priestess. Offertory Priestesses –Rev. Marcie Vonderwell-Hull and Rev. Dorothy Levan served as the Offertory Priestesses, and also as Califers during the toast. Rev. Jason Highcorrell HP of PURE Sanctuary acted for the First Elder with Rev. Pete Hertzberg HP of Northern Lakes as Elder’s Herald, and Rev. Green Owl HP of Trianna Temple acted for the First Priestess. Lady Selena Fox honored us with a special blessing. 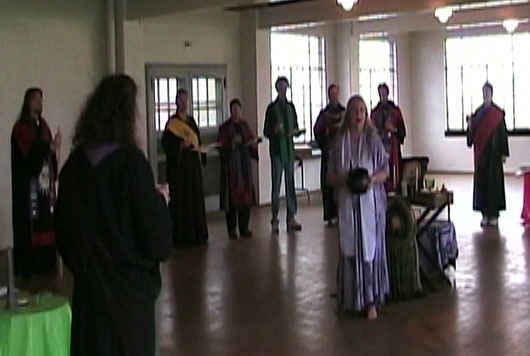 Lady Selena offers a special blessing during the Lustration of the Ancestors
​​As always the high point of the ceremony was the Oracle of the Ancestors, during which the Ancestors give their message to the Tradition and their blessing is channeled into the Lustral Water. This year’s Oracle was:
​As is our custom we gave a number of awards to recognize the hard work of our people. These included:

Congratulations to all of our award winners! Your efforts are much appreciated!