What I Learned
At The Parliament 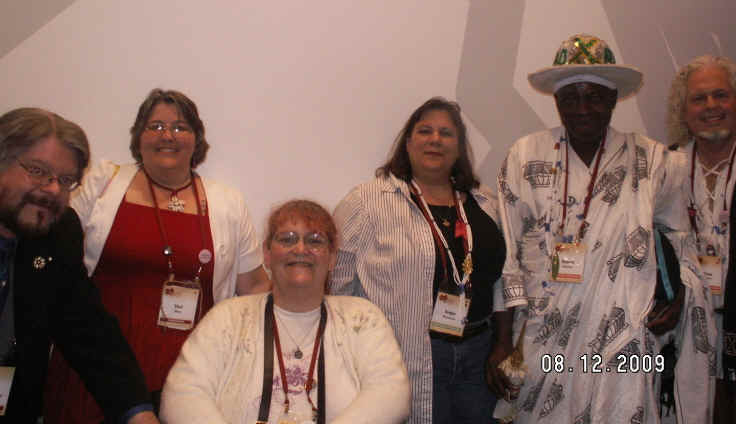 At the Parliament of the World's Religions, L to R, M. Rev. Don Lewis, Rev. Shel Skau of Circle, Rev. Olivia Watts, HP, Rev. Angie Buchanan of Gaia's Womb, a Trustee of the Parliament, His Majesty the King of Benin (representing African Vodun at the PWR), and Drake Speath. Photo courtesy of Olivia Watts.
​Greetings everyone,

As you may know Ed and I recently attended the Parliament of World’s Religions in Melbourne, Australia. This was a remarkable event and I will always remember it –especially the wonderful people I met: Rev. Citrine, Rev. Olivia Watts, and Rev. Wendy Kear, Krystie Lees-Smith, Gavin Andrew, Belinda and Helen, Gede Parma, Rick Kearsley of Spiral Dance, Badger, and many other lovely people! Then there were the old friends I got to see again –Angie Buchanan, River Higginbotham, Shel Skau, Shé d’Montford, and Wendy Rule to name only a few. And then of course there were the many other religious leaders I was privileged to meet and network with! It was a wonderful and very productive week! 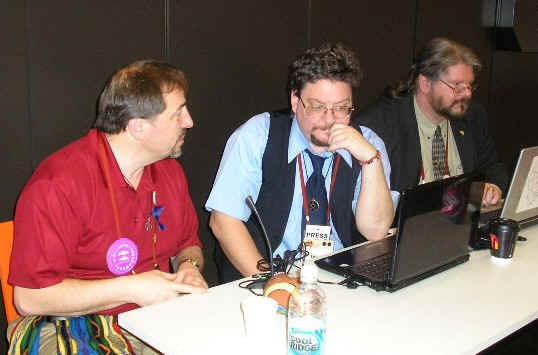 River Higginbotham gives an interview to Witch School Radio. Ed attended the Parliament as a member of the Press complete with Press Pass, and did a number of live broadcasts both video and radio, including a six-hour long radio program that included the interview seen above.
SEE OUR COVERAGE OF THE PARLIAMENT HERE
​I want to thank everyone who contributed to help support this trip! Because of your help we raised nearly $1000 to help defray the $6000 cost of the trip. Your contributions were a great help, and without that help we might not have been able to do this –so thank you very, very much!
​So which are we? Are Correllians an Indigenous Religion of Europe or a New Religious Movement? Although one doesn’t know if it still holds true now that everyone has returned home and a week has passed, at the Parliament it was made clear to me that as an outgrowth of a Familial Tradition Correllianism absolutely could be classed as an Indigenous Religion of Europe (notwithstanding that our familial origin is ethnically and culturally mixed).

Now I have been fighting for the recognition of the Familial Traditions for much of my life. I am sure you know that there are many who effect to deny that the Familial Traditions even exist. Indeed, it gives me great pride to see the Familial Traditions in a policy setting position at the Parliament. So you can imagine how surprised I am to find myself taking the position that Correllianism falls under the New Religious Movement heading.
​The third thing I learned at the Parliament is that as a movement Wicca –Correllianism included- really needs to make an effort to get out of itself and be more involved with our fellow humans. Our religion emphasizes introspection as an important aspect of personal growth, but introspection can also become obsession or narcissism if not balanced with action. We see obsession and narcissism in our community all too clearly –the constant fights and Witch Wars which never achieve resolution or build anything positive, and yet which cannot seem to be gotten beyond, the constant personality clashes which could be avoided by little more than good manners and a bit of patience. Watching the other religions at the Parliament really reminded me of the importance of putting belief into action, and of involving ourselves with our fellow people.
​And finally I learned one other, rather darker thing at the Parliament of World’s Religions. For all the talk about spirituality, indigenous rights, and charitable activities, I never heard a single word about the Witch persecutions going on in Africa. As you no doubt know Africa is in the grip of a Witch persecution that strongly resembles that of Europe’s “Burning Times” –except in Africa the larger proportion of the victims of this persecution are children. These “Witch Children” are beaten, tortured in often horrible ways, exiled from their homes and communities, and sometimes killed all because they are believed to be “Witches”. This persecution is being perpetrated on a number of fronts, but is largely coming from Protestant churches, many of which are funded from the US. This is what made Sarah Palin’s acceptance of a spiritual endorsement and blessing from African Witch Hunter Bishop Thomas Muthi so objectionable during the recent US election.