Lustration of the Ancestors​

At the Witch School International
Pagans in Global Action Conference 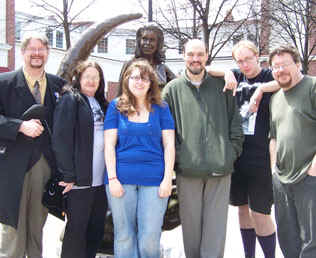 At Salem's Bewitched statue.
​Greetings all,

Among the oldest communities in the US, Salem features many historic buildings and has a long and remarkable history. Of course the most famous aspect of Salem’s history, and the one that brought us there, are the famous Witch Trials of 1692 AD / 1292 Pisces. In perhaps the most famous miscarriage of justice in North American history, numerous persons were imprisoned and nineteen were judicially murdered on charges that they practiced Witchcraft. The vast majority of these people had no connection to Witchcraft under any of its many definitions.
​And of course Salem is also the town of Laurie Cabot, Head of the Cabot Tradition and one of the great mothers of our movement, and of the famous Gypsy Ravish. And of course Salem is also the site of the annual Festival of the Dead, a month long extravaganza of the psychic, spiritual, and magical arts.

So we were all very excited that the “Pagans in Global Action” conference and the Correllian Lustration were to be held in Salem.
​The event was held in the beautiful Hawthorne Hotel, a Salem landmark.
We kicked off the event Friday evening with a reception in the Essex Room, where Salem business leader Christian Day spoke to us about the Salem community, and how Salem became a major tourist attraction focused on the idea of Witchcraft. Christian also spoke about the community’s varying reactions to Salem’s image as “Witch City”. Most notably Christian spoke about the ways in which media influences the image of the Witch, and how media can be interacted with to improve that image.
​Saturday evening those members of the Witan Council who were present met in the Skylark Room. Then we proceeded to initiations, beginning with Third Degree and moving on to Second, First, and finally Outer Court Dedications. As usual, the initiation ceremony continued for several hours. We were very honored to have Rev. Angie Buchanan join us for part of this ceremony.
​After the Lustration ceremony and the closing of the conference, a number of us toured the sites of Salem. I am sure we will long remember this lovely seaside town with its troubled past and vibrant future.

It was wonderful to see so many people come out for the conference –to see old friends once again, and to meet new people for the first time. Thank you for coming everyone! I would also like to thank Lady Isis Rose for the copy of her book “Witch in the Neighborhood” –a lovely book about interacting positively in your community, and wholly in line with the “Pagans in Global Action” theme!

I would again like to thank the Witch School Pagans in Global Action Conference for hosting our Lustration activities. 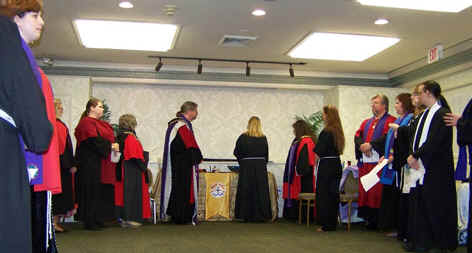 ​If you would like to see highlights from this years Lustration of the Ancestors including speakers Christian Day, Angie Buchanan, Stephanie Neal, the Handfasting Workshop and the Handfasting of Dan and Alison, as well as the highlights from the actual Lustration ceremony itself, you can see them at www.magicktv.com. Videos of these are also available from Witch School International at www.witchschool.com/pages/store-videos!