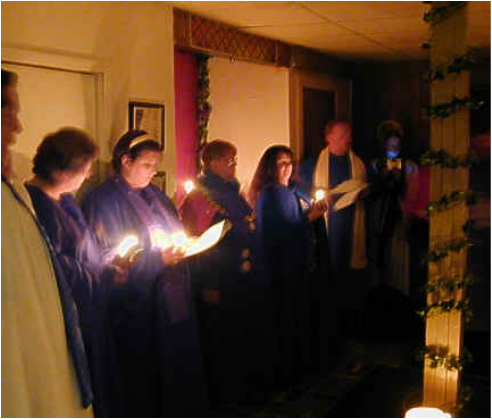 ​Ritual participants ranged along the south end of the Temple sanctuary include Chuck Farina from Akasha Temple, Liz a student of Rev. Paedusis who came all the way from from Ohio to attend the Lustration, Rev. Paedusis herself, Rev. Becci Penry of PURE Sanctuary, Rhiannon, and Basil Winterbourne from Akasha. 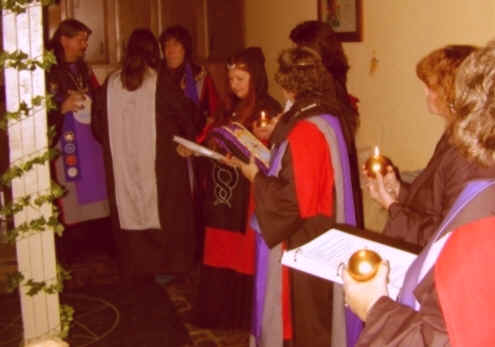 ​The Maiden Priestess Pro Tem, Sherry Highcorrell, invokes the Higher Self of First Priestess Lady Krystel. From the left the First Priest looks on, while to the right are Lady Ruthann of Akasha (Having a quick glance down at her Order of Service), Meghan Thomson, Lady Bitterwind (holding the purple-wrapped Book of Life), Kim Reffett, and Lady Green Owl. The Poteau Mitan is visible to the left, as is the pentagram rug laid out on the floor the ritual space. 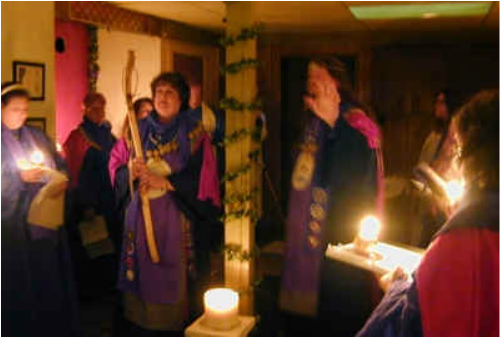 ​Lady Krystel raises her wand to invoke the Eastern Quarter. The First Priestess invokes the Quarter, and the Gods, lands, and peoples of the Quarter: then the First Priest follows by calling forth a number of Gods representing the Quarter. All together the Gods invoked number 70, thus this part of the ritual is called "The Invocation of the Seventy Gods." The representative of the Quarter (in this case the Quarter Guardian) then gives a blessing in the name of the Quarter, which is extended to the whole of the Tradition. 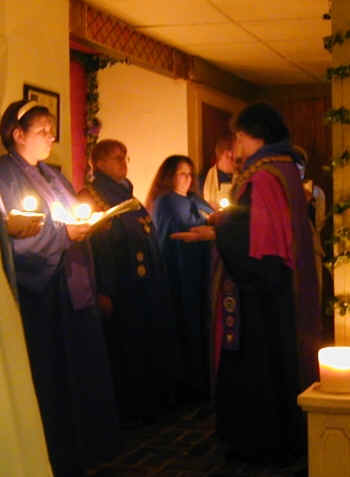 ​Addressed as Elisi, or Grandmother, Lady Krystel receives the Blessing of the South as described above. (Lord Don is just out of camera range.)

Five altars stand in the PURE Sanctuary, one for each of the Four Quarters and a fifth for Spirit. The largest of these is the South altar visible just behind Lady Becci, set into an alcove whose walls are painted white (right wall), red (back wall), and black (left wall, not visible). The smallest of the altars is the center or Spirit altar, seen at lower right at the base of the Poteau Mitan.

Seventeen representative Gods are invoked for each Quarter together with "all Who are with" Them. This makes a total of sixty eight Deities called by name, the final two of the "Seventy Gods" being transcendent Goddess and God. 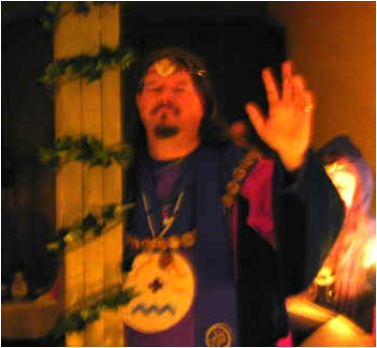 "The Invocation of the Seventy Gods" is used only in the most important Correllian rituals, and is an aspect of the Correllian practice of calling together and bestriding all realities at once, creating a Nexus Point. It is the vantage of this Nexus Point which is referred to by the phrase (used when the First Priesthood align to their Higher Selves) "We are the One Who is the Nine: We are the millions of Souls Who are the Billions of Lives..." 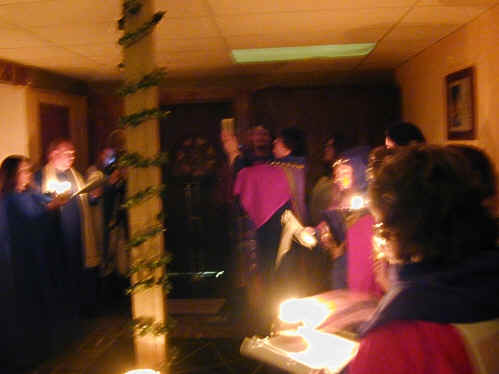 ​Lady Krystel holds the Chalice aloft prior to its being blessed by Great Rite. Moments later Lady Becci and Basil Winterbourne (standing in for John Penry, who was ill) will read the joint Charge of the Goddess and God, and consecrate the Chalice with the Athame. 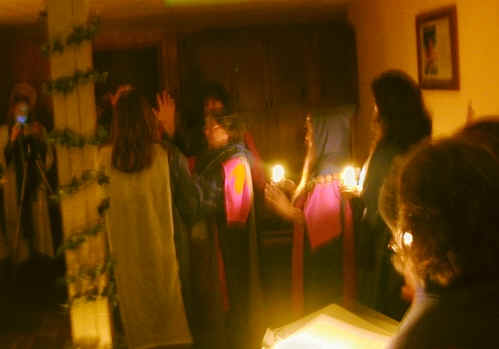 Here Maiden Priestess Sherry Highcorrell has brought forth the new pages to be added to the Book, listing members who have entered the Tradition since the previous Lustration of the Living. First Elder Lady Bitterwind has brought forward the Book itself. The new pages are blessed and added to the Book, which is then blessed itself. Later the Book of Life will be aspersed to carry the blessing of the Ancestors to all of those listed within its pages. 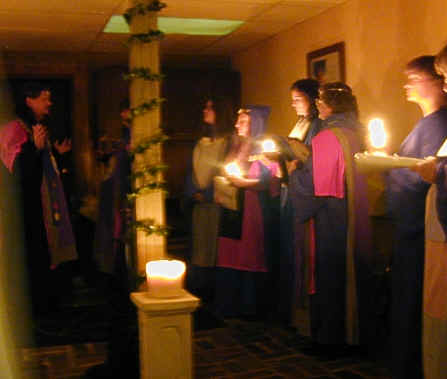 ​The First Priest Lord Don channels the message of the Ancestors for the Tradition. This years message spoke of growth in the Tradition and changes in the world and the need to maintain balance.

When the message is complete the First Elder Lady Bitterwind will bring forth the cauldron of the Lustration, filled with the waters of the holy Vermillion river: grasping the sacred Ulunsuti crystal the First Priest will channel the blessing of the Holy Ancestors into the water, which is then used to asperge all present, and the Four Quarters together with (symbolically) all Their Gods, lands, and people including all of the Correllians in each of the Four Directions.