Regional Lustrations of the Living for Year 16 Aq.

This year we are happy to bring you reports from two Regional Lustrations:

On 5 October Sedna Temple led by Arch Priestess Rt. Rev. Anna Rowe held their annual online Regional Lustration ceremony. The event drew participants from across Europe as well as the US. There are no photos of the ceremony as it was held in a chat room format, but the highlight of the ceremony, the Oracle of the Ancestors, is reproduced below:

“Be true to yourself which will release energies to deal with what we find within. Inner strength will guide towards goals, difficult times must be met with strength and determination, fight on, meet adversity head on!

Making hasty decisions is as bad as not making a decision, think carefully, creativity and success the truth is waiting to be discovered.  Be careful of wishful thinking in the choices you currently face. Calmness, too many choices to face, avoid indecision.

Unexpected events and a temporary loss of stability, irreversible change on every level.  Strike down the old clear the way ahead. Sudden upheaval unexpected change beware of disasters natural or otherwise, unavoidable change is ahead!” 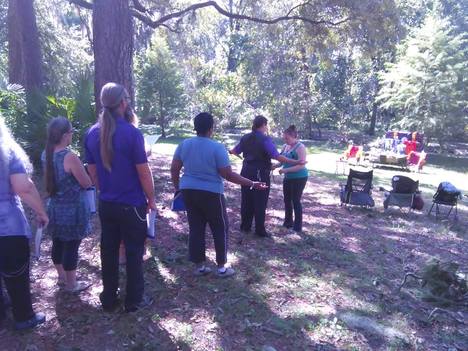 Above: Lining up to be smudged before entering the Lustration grounds.
CHOSEN PATH CHURCH
​REGIONAL LUSTRATION

Many interesting activities had been planned for the weekend, including workshops and craft activities. Unfortunately everything except the actual Lustration ceremony ended up having to be cancelled. This was because hurricane Matthew struck the Jacksonville area just as Lustration weekend would have begun. Happily the storm had lessened in intensity from what had been predicted, but it still did a great deal of damage and left many without power, including Chosen Path Church for some 24 hours. 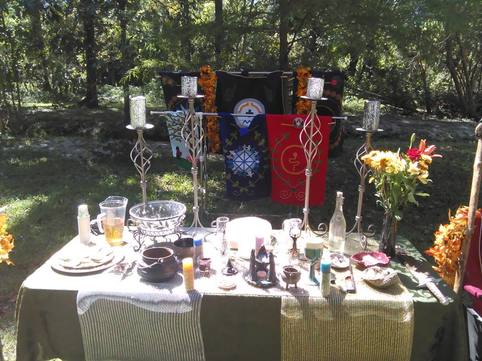 Above: The Lustration Altar
Although the possibility of cancelling the Lustration ceremony was considered, given that many who had planned to attend were unable to do so, it was decided to go forward with the rite. It was felt that holding the ceremony despite the difficulties of the situation would make a positive statement about the resilience of the human spirit. It was also felt that in the wake of the storm people would be especially desirous of the Oracle of the Ancestors.

The ceremony was attended by members of Chosen Path Church and members of Compassion League Temple, as well representatives of local non-Correllian Temples such as Sanctuary: Realms of Spiritual Growth, and Olympic House of Venus-Hathor.

​The Oracle brought through during the ceremony was this: 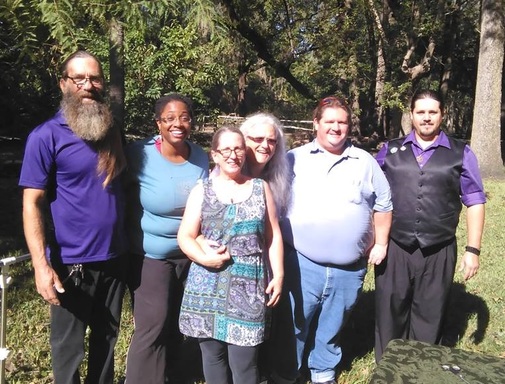 Above: Group picture showing some of the Lustration participants, L to R: Rev. Rodney Rexrode, Char Davis, Rev. Pam Beck, Rev. Laurie Denman HP, Barry Blumenthal, and Dustin Goodall of Sanctuary: Realms of Spiritual Growth and NEFlPLC.
"You will find as you go forward
Many doors opening which
Have been closed before
You will find going forward
The time has come for that
Which is long-awaited
You will find going forward
That there are no
Obstructions in your path
You who work for the
Turning of the Age
​You who work for peace
Now is the time
Old forms are falling away
In what often seem like
Destruction and chaos
And truly, it is 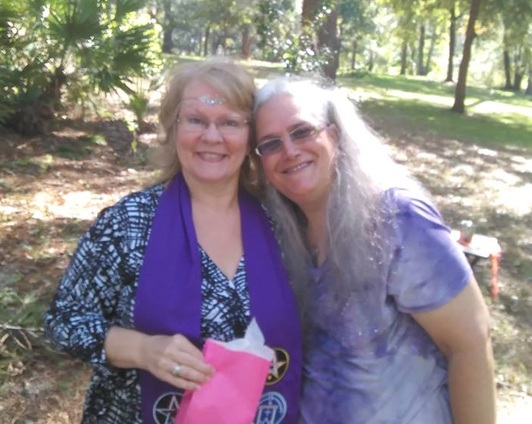 Above: Rev. Angela Munn HP of Compassion League Temple and Rev. Laurie Denman HP of Chosen Path Church
For the destruction of old forms
Brings us to the moment of chaos
In which all things are possible
You stand at that moment
And we say to you:
Be clear in that which you desire
And know that it is possible
Be focused in the Work
That you do
And know that it shall
Come to pass
Now is the time for which
You have prepared
And each day brings you closer
There is much need in this world
For peace, and knowledge, and wisdom
You are not the only ones
Offering this things
But it is why you have come
To this place 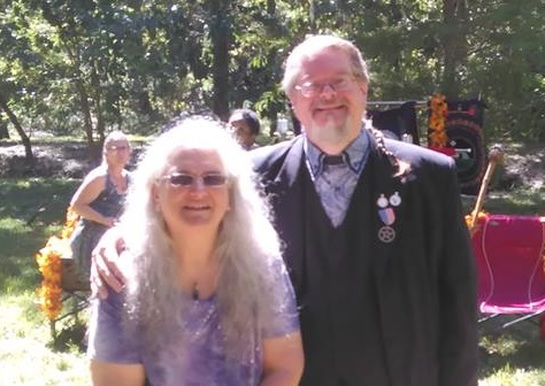 Above: Tradition Chancellor Rev. Don Lewis with Rev. Laurie Denman of Chosen Path Church
Share your peace and your knowledge
And your wisdom
With the world
And let it share
It's knowledge, peace, and wisdom
With you
Let one hand stretch forward
And take another
As we all dance the dance of life
Let us dance into beauty and joy
These then are our words to you
​​Take the knowledge you are given
And share it
And you will see a better world for it
We love you and we are proud of you
And we rejoice in you" 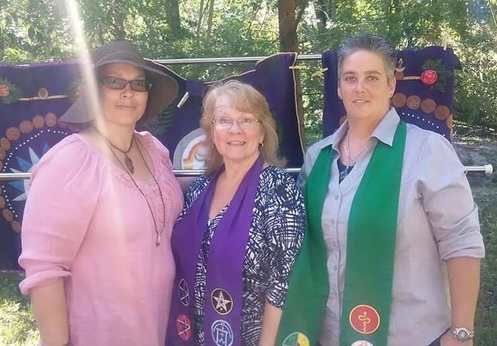 Above: Katie, Rev. Angela Munn HP, and Merelda from Compassion League Temple
During the ceremony the following awards were announced:

The Order of the Silver Chalice was awarded to Rev. Lon Dubh for his efforts in illustrating the book "La Magia de los Elementos" by Rt. Rev. Harwe Tuileva.

The Order of the Iron Pentacle was awarded to Rev. Nuhmen Delos for leading a monthly devotional service that has touched many lives, as well as for his work in translating the Order of World Walkers materials into Spanish.

Since all of the other Lustration activities which had been planned were cancelled, there was no Deeming held during the weekend. However, knowing that several groups were expecting deeming, Templar Grand Deemstress Angela Munn held a special Deeming session at her home the following Thursday night.
​
Up for Deeming were:

All three were passed to full Temple status by unanimous decision of the Deemsters' Court.